The International Media on Putin-Erdoghan Meeting 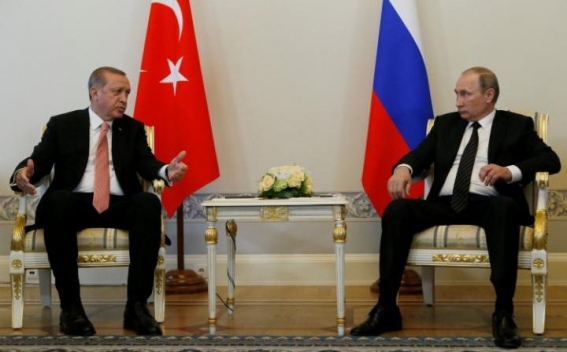 The talks addressed Syria, anti-terrorism cooperation, and economic cooperation between the two countries, including sanctions imposed by Russia that have battered the Turkish economy.

''Now the two sides — neighbors, trading partners and off-and-on rivals for centuries — are ready for reconciliation, and it was Putin’s swift condemnation of the July 15 coup attempt that helped advance the rapprochement'', - Washington Post writes, - ''In a climate of heightened anti-Western sentiment, Erdogan’s move to warm relations with Russia may cement Turkey’s alienation from its traditional allies''.

''The earlier uptick in relations was built on a macho friendship between Putin and Erdogan, two combative leaders in their early 60s credited with restoring confidence to their nations in the wake of financial crises but also criticised for clamping down on human rights.

But after such a bitter dispute — which saw Putin accuse Erdogan of stabbing Russia in the back and having links to the illegal oil trade with the Islamic State group — it will take a lot for the pair to mend ties'', - France 24 in turn reports.

A very rough and a bit sarcastic article was written by the British Independent referring the Putin-Erdoghan meeting as a Sultan-Tsar meeting.

''So the Sultan travels to see the Tsar at the royal seat.There is a long list of the potential losers in the theatre of St Petersburg'', writes the newspaper, -''First, Isis and al-Qaeda-Nusra-Fatah el-Sham, and all the other Islamist outfits now fighting the regime in Syria, who suddenly find that their most reliable arms conduit has teamed up with their most ferocious enemy, the owner of the Russian air force. Then there’s the Saudi and Qatari billionaires who have been supplying the cash and guns for the Sunni warriors who are trying to overthrow both Damascus and Baghdad, and humble the Shia of Iran, Syria and Lebanon.

As for the relations with the West, Turkish officials deny they are turning their backs on the West. '' But Erdogan's cordial trip to Russia, a nation at odds with the West on a host of issues from Syria to Ukraine, may give Turkey's allies pause for thought'', - CNN reports, - ''And amid Ankara's strained relations with the West, the Kremlin also senses an opportunity to win over a NATO member. To increase divisions within the Western community and in NATO is one of the purposes and one of the goals designed by Russia''.