Vigen Sargsyan Is Appointed RA Minister Of Defence: What To Expect? 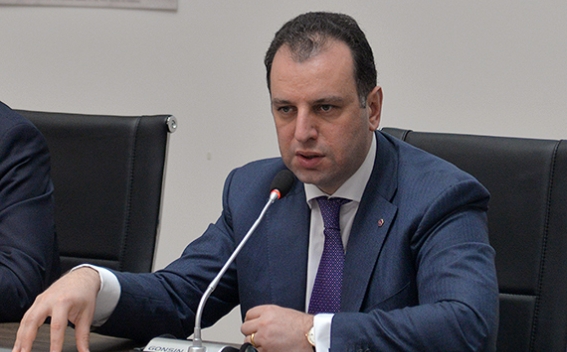 The former Head of the Administration of the RA (Republic of Armenia) President Vigen Sargsyan is appointed the Armenia’s Defence Minister. The appointment of a civilian with long-year experience in administration will cause number of discussions both in Armenia and in partner countries. Below we’ll try to understand what developments will the decision bring forward analyzing Vigen Sargsyan’s biography and causes of his appointment as a Defence Minister.

The appointment of the new prime-minister and the "technocratic" government in Armenia speaks of the state authorities’ intention to undertake systematic reforms in the country. In this context appointment of Vigen Sargsyan as a Defense Minister was a sharp and explainable decision.

He has worked for many years in the public administration, occupied high positions during all the three presidents of Armenia. From 2007 he had worked in the President’s administration and in 2011 he became the head of the administration.

During this whole period Vigen Sargsyan was distinguished by his administrative excellent skills. The president always relied on him for the complete coordination of separate tasks, important for the country. For example, Vigen Sargsyan was the coordinator of the State Commission on Coordination of the events dedicated to the 100th anniversary of the Armenian Genocide. During that period he worked closely with many partner countries, organizations and individuals of Armenia.

This appointment speaks about upcoming reforms in the defense sphere that are important and are demanded by the new reality. Taking into account, that Vigen Sargsyan has good relations with the already former Minister of Defence, we can expect that in parallel with the reforms, Vigen Sargsyan will be able to keep the best traditions of the Army and Ministry.

Besides, we should take into account, that Vigen Sargsyan as the Head of the administration of the Army’s Supreme Commander-in-Chief, took part in the meetings on the high level, including also the discussions on the military issues. So, he is well informed of the priorities of , external relations and existing problems in the sphere of defense. The good relations with the colleagues of different countries will also help him keep and develop external relations of the Ministry.

The External Vector of the Ministry Will Not Change

Vigen Sargsyan, due to his working duties and passed path, is also well-informed of the direct and non-direct military and diplomatic processes related to the Karabakh conflict and has a complete understanding of the RA interests in the issue. This also gives ground to assume that the external vector of the Ministry will not undergo real changes during the newly appointed Defence Minister.

In this context Sargsyan’s education, particularly the fact that he started his career in Saint Petersburg State University of Management, studying the specialty of ''Staff Management" is worth attention. Besides later, 1998-2000, he studied and graduated from Fletcher Diplomacy School of Tufts University (USA) receiving the Master’s Degree in Law and Diplomacy. This means that Sargsyan has deep knowledge of our main partner countries' administrative traditions, cultures in the defense sphere and has respective personal, partnership connections, which will essentially facilitate the cooperation with them.

This appointment is also very interesting when considered in the context of the balance of civil-military spheres in the state system. The appointment of a civilian as a Defence Minister will be accomplished by two other main appointments, particularly by Yuri Khachaturov’s position as the Secretary of National Security Council and that of Movses Hakobyan as the Chief of General Staff of Armed Forces.

To sum up we can state that Vigen Sargsyan will preserve and will develop current foreign political vector of the RA Defence Ministry. At the same time the reforms in the army and in the Ministry will even contribute to the raised effectiveness of the system, which, in its turn, among others, will also positively affect our relations with our partners.