"Turkish Stream" Project: A Final Agreement between Russia and Turkey, or...? 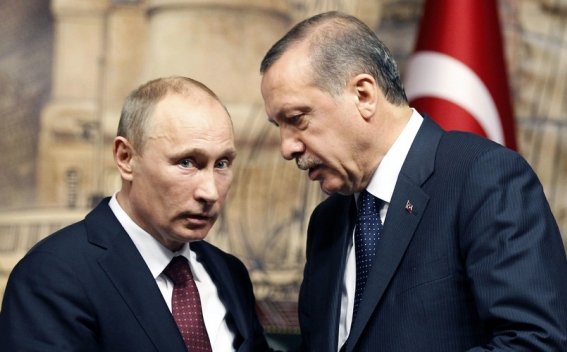 For the first time after the crisis between Moscow and Ankara, Russian President visited Istanbul to attend the 23rd World Energy Congress. After the closed meeting between the presidents Russia and Turkey signed the "Turkish Stream" gas pipeline intergovernmental agreement. The two countries had reached a consensus on another problematic issue: on discount in natural gas prices as part of the deal.

Russian Gazprom informed that the "Turkish Stream" gas pipeline would consist of two lines. The pipeline will carry Russian natural gas to Turkey and to Europe under the Black Sea. The Russian side plans to complete the construction of the first line by 2019. Its annual capacity is to be 15.75 billion cubic meters of gas (bcma). The second line will supply gas to European consumers.

The memorandum of understanding (MoU) for the construction of the Turkish Stream gas pipeline with a capacity of 63 billion cubic meters (bcm) of gas per year was signed between Russia’s Gazprom and Turkey’s BOTAŞ in 2014. At first they were going to complete the construction by December 2016. But the launch of the project was being postponed due to various reasons. As a result, in November 2015 the Russian side said the "Turkish Stream" gas pipeline project would be changed, its annual capacity will be reduced by about two times and the launch of the project would be postponed until the end of 2017.

Then amid the tensions between the countries after the downing of the Russian Su-24 bomber by Turkish forces over the Syrian border in November 2015, the project was postponed. In September 2016 Gazprom said it received through diplomatic channels first permits from the authorities of Turkey for the implementation of the "Turkish Stream".

At this stage when Moscow and Ankara announce about overcoming the crisis between the two countries the launch of the project through the signing of the intergovernmental agreement is a serious impulse that should be considered both at bilateral and global levels.

At first, the "cold atmosphere" between the countries since November 2015 was hard to describe as a crisis as despite the aggressive rhetoric, military, political and economic cooperation between Ankara and Moscow continued. Almost the same way the process of Turkish-Israeli crisis and then the reconciliation took place. If we follow this logic Moscow and Ankara now try to demonstrate the process of reconciliation. And from this point of view the signing of the intergovernmental agreement on such a problematic issue like the "Turkish Stream" may serve this purpose. It means the signing of the intergovernmental agreement cannot still guarantee the implementation of the project. It may be signed for propaganda purposes.

The intergovernmental agreement between the two states is noteworthy also due to their strained relations with the West. It is obvious that one of the main aims of the agreement is to give the appropriate impulse to the West. The joint statement of Erdogan and Putin on the common vision in Syria pursues the same goal.

At the same time realizing the need of weakening the resistance of the EU for the implementation of the project Turkey and Russia try to involve European countries and obtain their consent. Particularly, Turkish Prime Minister said the construction of the pipeline "would strengthen Europe's energy security and they have no reason to worry". In his turn during his speech in Istanbul Putin said "Russian energy exports were a guarantee for the successful functioning of many countries’ economies". "I will only mention that our oil and gas account for more than a quarter of the European Union’s energy consumption," he said, Kremlin press service informs. At the same time Russia holds intensive talks with European countries, particularly Greece, to come to an agreement on rapid implementation of the project. Earlier such negotiations were being held with Hungary, Macedonia and Serbia.

From this point of view "the political landscape" can also be beneficial for the implementation of the project. For example, the Iranian side welcomed the signing of the agreement and said the Iranian government may come to an agreement with Turkey and use the "Turkish stream" pipeline to supply the Iranian gas to Turkey and then to Europe, adding that it depends on "the political landscape". Iranian involvement in the project may increase the effectiveness of the project. And if we accomplish the above mentioned, the fact that Russian Gazprom wants to cut gas supplies to Europe through Ukraine then the implementation of the "Turkish stream" pipeline project becomes more realistic.

In case of successful implementation of the project Turkey’s energy role in the region will greatly increase. But one should take note that there are lots of difficulties that need to overcome.  It will not be easy to come to an agreement with Brussels on gas consumption through this pipeline and perhaps this is the reason why Russia saves time and at the first stage being satisfied with the construction of the first line that is designed only for Turkish consumers in order to get the "general political landscape". Perhaps this is why Russia reduced the annual capacity of the pipeline by about two times. It is not excluded that Russian may have designed another way to supply its gas to Europe through another way, for the example, thought the agreement with Iran.

If we add to this the adventurous stance of Turkey that may refuse the project at any time it becomes clear that it is too early to talk about the successful implementation of the "Turkish stream" pipeline project.