EU-Armenia New Agreement Is a New Cornerstone for Our Relations 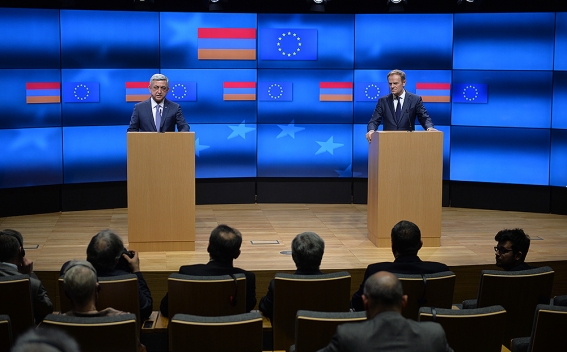 On February 27, in Brussels it was officially announced that the EU negotiations on the new framework agreement have been completed. The President of Armenia Serzh Sargsyan and the President of the European Council Donald Tusk said this during Sargsyan's visit to Brussels.

Negotiations on the agreement are completed

Back in 2013 the Association Agreement with the EU was totally ready and the sides were also ready for signing. However, after the announcement of Armenia's joining the Customs Union it became impossible to sign an Association Agreement with the European partners, and the process was stopped at that stage. With the help of two years of consistent work Armenia managed to restore confidence at the high level and even started the negotiations on a new framework agreement.

The negotiations were launched in December 2015, and the new document has been agreed today after a year of intensive negotiations.

As President Sargsyan said in Brussels, "It’s true that Armenia's joining the Eurasian Economic Union was not initially approved by some of our Western partners, but time puts everything in place ."

The new framework agreement will be called "comprehensive partnership agreement." This means that it will address all areas of EU cooperation, including the vision of their development, from political to economic one.

It is expected that in the nearest future the parties will start a dialogue on visa liberalization with Armenia.

Armenia has never made a choice of civilization, because it is both committed to European values, as well as its relations with traditional partners. Therefore, Armenia's foreign policy has always been a combination of both European and Eurasian vectors. "Even at the most difficult moments in the history Armenia has not put the issue to make a choice of civilization," the President said, stressing that the cooperation with the EU is based on values.

Armenia, avoiding the creation of new dividing lines between the two opposing integration processes, in turn tries to contribute to closer ties between the EU and the Eurasian Economic Union.

In this context, the quality of the relationship between Armenia, as a member of the Eurasian Economic Union, and Georgia, as an associate partner in the EU is important. And this was emphasized at the highest level. During the visit it was also confirmed that "Armenia is ready to become a stable partner in the region, which will contribute to the enhancement of relations between major players, as well as economic development and the formation of effective investment policy."

During his visit to Brussels, Armenian President underlined that Armenia will continue reforms in all areas, and it attaches importance to the EU's support in that process.

In the context of the overall reform a special attention was paid to the constitutional reform and the upcoming parliamentary elections in Armenia. Serzh Sargsyan expressed gratitude to the EU for the support in the process of reform. "At this important stage for Armenia the EU stands by our side providing some significant resources for the implementation of the provisions of the Electoral Code. I am confident that this support and the results of our cooperation will be visible to everyone," said Serzh Sargsyan. He underscored the need to increase public confidence in the electoral process and the continuing work with the opposition for organizing the elections.

"We set the bar high: to hold democratic, free, fair and transparent elections. I am confident that we will make our goal a reality, and the atmosphere in the electoral process and election results will confirm the rightness of our approach,"  he said.

During the visit, naturally, Sargsyan also referred to the Karabakh conflict and Azerbaijan's destructive policy. The President underlined: "Azerbaijan's aggression proved once again that there has not been and there is no alternative to the secure existence of Artsakh people struggling for freedom on their own land."

In particular, reference was made to Azerbaijan's recent statements on the status quo and it was specified that there is only one way to change the status quo, it is the recognition of self-determination of Artsakh people.

In order to remain committed to a peaceful settlement of the conflict, the president warned that "new military adventure attempts by Azerbaijan will have unpredictable consequences for Azerbaijan itself."

In addition, the European public's attention was drawn to the ongoing democratic processes in Artsakh and the Artsakh people’s right to equally enjoy all fundamental human rights in the democratic world.

Overall, it should be noted that this visit to Brussels marked the transition to a new quality of relations with the EU on a new legal basis, which is consistent with the high level of relations and prospects of their development. At the same time, it is necessary to state that the framework agreement is not a new process, but progress is always ongoing.

During the next few months some time will be needed to translate the document into the EU Member States languages, to sign and ratify it.