Proposals to Improve the Effectiveness of Parliamentary Diplomacy 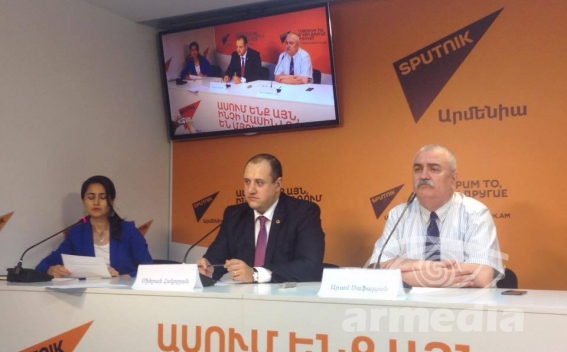 Taking into consideration the fact that Armenia is passing to the Parliamentary system of governance, parliamentary diplomacy will now have more importance in the foreign policy of Armenia. The press conference of the Deputy of the National Assembly of the Republic of Armenia, Mihran Hakobyan and the head of the "Integration and Development" NGO, the chairman of the Eurasian Expert Club Aram Safaryan, was dedicated to this topic.

"In a parliamentary form of governance, a completely different philosophy works in the modeling of both internal and external political issues. When the role of the Parliament grows, the role of the parliamentarians in diplomatic relations also grows," Mihran Hakobyan said. He stressed that in this context, the potential of parliamentary diplomacy grows - both in the format of bilateral and multilateral relations.

In the context of the growing role of parliamentary diplomacy, Aram Safaryan stressed that the importance of adopting qualitative political decisions is also growing. "In order to make qualitative decisions, it is simply necessary that the political forces - both the ruling and the opposition - have a developed, scientifically reinforced civil position that will be promoted at international platforms," Aram Safaryan said.

Considering the above-mentioned, the Eurasian Expert Club has developed several proposals that are designed to raise the level of political decisions made with the support of civil society and contribute to enhancing the effectiveness of parliamentary diplomacy. As noted by Aram Safaryan, these proposals are submitted for a wide discussion, so that if necessary, they are used in the National Assembly from the autumn.

In particular they suggest the following:

- Within the Interparliamentary Commission for Cooperation between the National Assembly of the Republic of Armenia and the Federal Assembly of the Russian Federation, to form a scientific and expert council that can support the work of the Commission and promote the adoption of high-quality solutions. A similar commission is proposed to be formed also in Russia with the involvement of Russian experts, and twice a year to hold joint meetings of experts and parliamentarians in Moscow and Yerevan.

- Use the experience of the previous convocation of the National Assembly and hold joint meetings of the Standing Committee on Economic Affairs of the National Assembly and a similar collegial institution of the Russian side to promote bilateral economic relations and attract investment. In this matter, the proposal is based on the experience of Serbia. This is seen as a possible incentive to attract Russian investments to Armenia.

- Following the example of the Bureau for Eurasian Integration in the Russian Academy of Sciences, to establish a Eurasian integration council at the National Academy of Sciences of Armenia, which will collect and systematize scientific works in the field of Eurasian integration, proposals developed in scientific circles, and put them on the bases of the development of State policy. Interaction of this Council with the collegiate institutions of the EAEU countries is underlined. The Eurasian Expert Club offers Ashot Tavadyan, candidate of economic sciences, to be the Secretary of the council.