Raqqa's Liberation: Turkey and the United States Have Appeared in a Deadlock 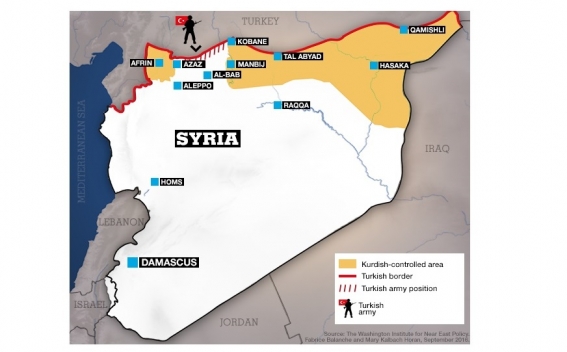 Erdogan did not exclude that Turkey could launch a new large-scale military operation in the north of Syria. "Now the negative processes are taking place in Syria. If it results in a threat to our borders, we will respond in the same way as during the "Euphrates Shield"," Erdogan said, clarifying that it is not just so much about the terrorist threat by ISIS, but about PKK. "Turkey will not allow the establishment of a Kurdish state," Erdogan said.

It should be recalled, that the official goal of Turkey's "Euphrates Shield" operation in Syria from August 2016 to March 2017 was to neutralize the terrorist threat by ISIS for Gaziantep, the Turkish province, but in practice it aimed to stop the advancement of the Kurds in northern Syria, near the Turkish border. As a result of the "Euphrates Shield," Turkey established its control over the area of about 3,000 square kilometers in the north of Syria, including the cities of Jarablus and El-Bab.

Within the framework of the "Euphrates Shield," Turkey also planned the liberation of the city of Manbij from the Kurdish forces and the establishment of control over Raqqa, which Ankara thinks will completely neutralize the Kurdish threat. However, these Turkish plans were prevented by ally US, which took Raqqa’s liberation mission in its hands. In this regard, the US is actively cooperating with the Kurdish forces, which naturally does not like Turkey. Official Ankara has repeatedly raised this issue, but Washington does not pay particular attention to Ankara's dissatisfaction.

It should be noted that the liberation of Raqqa is not only of strategic importance, buthas also moral and psychological importance. The party liberating the capital city of "Islamic State" will be presented to the world as the most effective anti-terrorist actor in Syria, claiming to receive more dividends during the negotiations. In this context, the US "gratitude" to Kurds can also be expressed by the support of the political ambitions of Kurds, in particular, with the political support of the establishment of a Kurdish state in the north of Syria. Ankara views it as a threat to its national security (Ankara is sure that the creation of a Kurdish state in the north of Syria can become a signal for Turkish Kurds to activate the national liberation struggle).

Most likely, Erdogan warns Washington of the possibility of launching a new operation to liberate Raqqa and Manbij, sending a message to Washington to stop the cooperation with Kurds. It is interesting that Erdogan made this statements ahead of the G-20 meeting in Hamburg. This summit will be a good opportunity for some of the major foreign actors involved in the Syrian conflict to agree on the interests of each other in Syria. In the absence of such an agreement, however, it can not be ruled out that Erdogan's statements on the launch of a new military operation in Syria may become a reality (it should be noted that in spite of the "Euphrates Shield" operation, Turkish troops continue to stay in Syria). At the same time, the Trump administration is trying to regain its reputation which it had lost in the recent months on the background of Russian successes in Syria and will not give up the idea for the implementation of which, however,  Kurdish support is needed.

Thus it turns out that two US strategic allies are fighting against each other in Raqqa. In order to get out of this deadlock, Washington will have to provide Turkey with convincing guarantees that it will not cooperate with the Kurds after Raqqa's liberation.