Armenia Shows the Best Results in the EAEU: the Eurasian Expert Club Sums up the Results of the Year 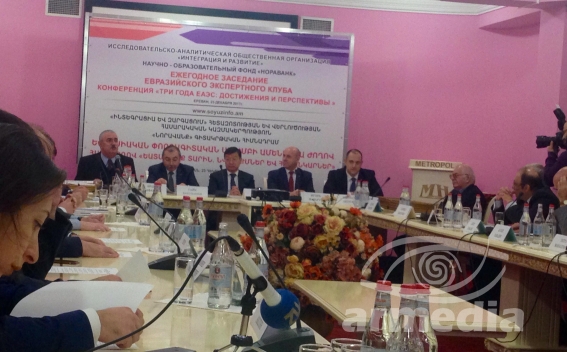 On December 23, the annual meeting of the Eurasian Expert Club took place, summarizing the results of the past year for the EAEU and Armenia.

The meeting under the topic "Three Years at the Unified Energy System: Achievements and Prospects" was held with the support of NGO "Integration and Development" and the "Noravank" Research Foundation. Chairman of the "Integration and Development" NGO Aram Safaryan noted in his opening speech that the Eurasian Expert Club was founded four years ago and actively advocates for the success and development of the Eurasian integration processes. "We analyze, make forecasts, identify shortcomings and propose solutions, thereby constructively influencing the process," Aram Safaryan said.

According to Igor Nazaruk, we can state with confidence that the unified union is already formed, but it will not stop at what has been achieved and in 2018 the work will be continued in order to form an internal energy market. Summing up the results of 2017, the ambassador noted that despite the crisis and sanctions against some members of the EAEU: "In 2017, we can talk about the growth of a number of economic indicators. Mutual trade increased by almost 27%, foreign trade by almost 25%, the increase in industrial production may reach 2.5%, in agriculture - 3.2%. By the way, Armenia has exactly the same rates in these areas."

As for the agreement signed between the EU and Armenia this year, Nazaruk expressed optimism, stressing: "This circumstance can serve as an additional element that will enhance the effectiveness of cooperation between two very powerful regional unions."

Timur Urazaev, in turn, noted that, despite all the difficulties, all the countries of the EAEU confirm the positive dynamics. "Against the backdrop of all the members of the Union, it is Armenia that shows the best results, both in 2016 and in accordance with the preliminary results of 2017. I am referring to the dynamics of economic growth and a significant increase in exports both to the EAEU countries and to third countries," the ambassador of Kazakhstan said.

He also addressed the main trends in the EAEU, including the processes of digitalization of the economy, in which Armenia seeks to play a leading role. "It is noteworthy that since the Soviet times, both electronics and cybernetic systems have been well developed in Armenia, now it's all simply called IT. In this sense, Armenia has a very good potential, especially in the current conditions of limited transport links with Armenia.’’ Summing up, Urazaev noted that Kazakhstan, like other countries of the EAEU, is committed to strategic integration into a unified and competitive model.

Alexander Vasilyev in turn highly appreciated the activities of the Eurasian Expert Club. He noted that within the framework of the Eurasian Expert Club, high-level discussions are always held, ideas are generated that do not remain within the club, but are brought to the decision-makers. Speaking about the growth of the Armenian economy in the framework of the EAEU, Vasiliev mentioned: "I would like to note the great success of Armenia, which is very visible, not only in terms of the trade growth, but also the growth trends of those industries, which we counted on and which the Armenian economy needs as an air. One of the results of this year is the good growth of the manufacturing industry."

The participants of the conference were also welcomed by the members of the National Assembly of Armenia Mihran Hakobyan and Hayk Babukhanyan. Babukhanyan noted that the EAEU and CSTO for Armenia are ways for preserving our national sovereignty. "The essence of Eurasianism is an ideology that gives an opportunity to develop as national states," he said. Mihran Hakobyan, in turn, stressed the need for effective competition and combating disinformation of the population.

Reports were made by leading members of the Eurasian Expert Club, presenting topical issues of the development of the Eurasian integration. Director of "Noravank" Foundation Gagik Harutyunyan spoke about the importance of critical infrastructures that are crucial for national security and effective functioning of the state and society as a whole. He noted that the real safety of critical infrastructures in all areas depends on the level of development of the scientific and technological sphere. "The reason for the current state of affairs in the EAEU is precisely the low level of the scientific component in the decisions made" said Harutyunyan, adding that state intervention and new state regulation measures in the field of science and technology widely used in the US and the EU are quite necessary.

Doctor of Economic Sciences, Professor Ashot Tavadyan in his report spoke about the achievements of the Armenian economy in 2017 and the urgent tasks of the EAEU. Tavadyan noted that in 2017 in Armenia there is a significant growth in exports: about 17%, exports for the first time exceed $ 2 billion. "The GDP growth in Armenia will be about 5% in 2017, which is significantly higher than the planned growth of 3.2%." As the main tasks of the EAEU, he mentioned the need for adjusting and harmonizing the priorities of the economic policy of the EAEA countries, clearly defining its purpose, formulating a new model of economic development, the need to use all the opportunities for the creation of joint ventures, including in the defense sector, as well as the achievement of a clear implementation of treaty obligations by the EAEU countries and the coordination of macroeconomic policies.

Samvel Manukyan, candidate of sociological sciences, deputy executive director of "Noravank" Foundation, noted the sociological problems and tasks of the Eurasian integration. He stressed the importance of integrating high-tech industries, as well as scientific and technological research in order to overcome a number of problems existing in the EAEU.

Leading analyst of "Noravank" Foundation, UN national expert on energy Ara Marjanyan addressed the energy aspect of the Eurasian integration. "The geopolitical realities of our region are such that it is within the framework of the Western Project that the energy blockade of Armenia is being carried out, which is suffocating our economy and hindering our development," Marjanyan said. "It is necessary to stop the trends of technological and scientific degeneration of the republic, to revive and strengthen the traditions of long-term planning, modeling and forecasting, which should be included in the daily agenda of the Eurasian Economic Union," he concluded.

During the annual conference certificates were presented to five new members of the Eurasian Expert Club, as well as gratitude certificates to the representatives of ten Armenian media for objective coverage of Eurasian integration. It should be noted that "Armedia" IAA was also awarded.