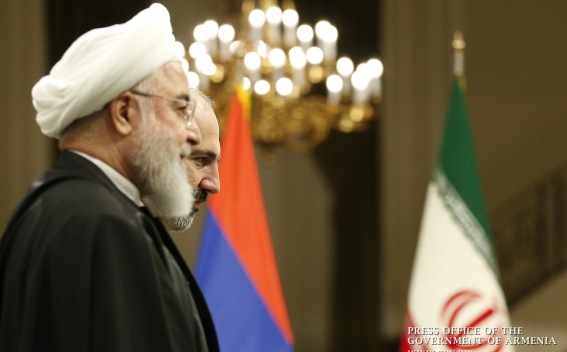 The meetings proceeded in a warm atmosphere with the parties emphasizing bilateral relationships and expressed willingness to further deepen them. This comes to support the RA new authorities’ assertions that there will not be dramatic changes in the Armenia’s foreign policy. To be noted that no dramatic changes have taken place either in the bilateral relationships or agenda related issues. The programs and cooperation paths discussed during Pashinyan’s visit basically repeat the previous authorities’ agenda. Both sides have emphasized the importance of political cooperation and  noted that the level of the economic cooperation does not reflect the potential of the two sides.

During the meetings they also emphasized the importance of ratification by the parliaments of 2018 Iran-EEU agreement on boosting bilateral trade turnover. Interestingly enough the agreement is not ratified either b Armenia, with the latter being the initiator should have been more concerned about its rapid ratification. Plus the ratification on the eve of the visit could serve as an impulse to developing Armenia-Iran relationships.

With the Armenia’s authorities emphasizing the importance of developing the relationships with the neighboring countries, namely with Iran and Georgia in the recent one year, it should be noted that no practical steps been taken towards developing relationships with Iran compared to Georgia. Moreover there have been a number of statements that raised  some concerns in the bilateral relationships. Among them is prime minister’s statement following a meeting with the USA’s John Bolton that the border with Iran can be closed any time. There is room for explanations in the bilateral relationships on the whole. It is also testified by the fact that almost one year after the revolution Pashinyan assures the Iranian authorities that no other country has a trace in the domestic developments of Armenia.

In conclusion, even though the prime minister’s visit to Iran was organized at a very high level, it did not contain anything new agenda wise. The agreements mainly related to programs already underway.