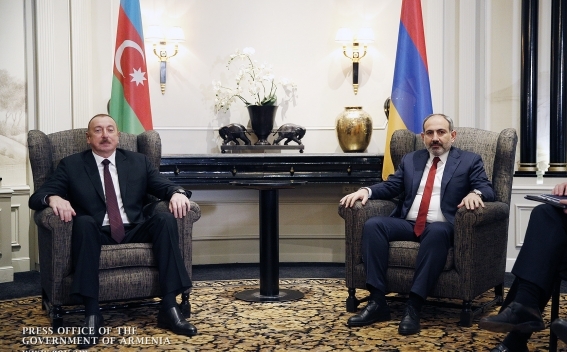 Positive assessment, lack of tangible results, can be a brief description of March 29 Vienna meeting between Nikol Pashinyan and Ilham Aliyev.

In a meeting with the Armenian community Pashinyan assessed the meeting positively meanwhile stressing that no breakthrough was recorded in the talks. “A process kicked off, that enables us to speak about our agenda, issues and pictures in mind,” Pashinyan noted.

Aliyev, in his turn assessed the meetings positively. “The meeting is important in terms of starting talks over content,” Aliyev said to TASS.

Aliyev, in his speech, reiterated that the change format will not change.  To be noted that RA prime minister Pashinyan restated previously the bare necessity of fully engaging Karabakh in the talks process. On the eve of the meeting he had stated of including the issue on the agenda. The OSCE MG co-chairs’ statement on March 9, as well not mentioning Artsakh engagement in the current statement show that the Armenian authorities have not succeeded at least in this stage. Moreover Armenia’s claim on urgently engaging Artsakh in this stage is not perceptible for the mediators and the international community. The mediators have constantly stated that Artsakh will be engaged in the talks following coordination of principles, during the talks on Peace Agreement. So the Armenian sides have a lot accomplish to achieve their objective of getting their point of engaging Artsakh, across. And the thesis of legitimacy sounds not to be enough for that. Vague is another question: on behalf of who does Armenia’s prime minister negotiate?

The next question the Armenian authorities raised prior to the meeting, that was to be on the agenda of the meeting with Aliyev, was the necessity of settlement principles and clarification of elements. Given the joint statement of foreign ministers of Armenia and Azerbaijan and the mediators on March 29 meeting, the issue was on the agenda with “the leaders exchanging opinions on regulation process and content related issues.” However, Ilham Aliyev’s statement following the meeting that Azerbaijan’s priority is the so-called “de-occupation of Azerbaijani territories,” gives an impression that clarifications did not yield results. If the clarification is over and this is the result, then it raises concerns, and if clarifications are not over, then there should have been agreements not to make comments till the end of the process.

Meanwhile the necessity of providing constructive environment in the talks process for further tangible steps, is stressed. So the process of getting to know each other’s positions and clarifying approaches can’t last and clear cut steps will be needed. However in this stage and environment their nature will be hard to figure out.

Another noteworthy issue is confidence building measures. The joint statement reads that the two leaders reaffirmed the need for ceasefire reinforcement and direct communication improvement mechanisms referring to Dushanbe arrangements. No reference to Vienne, Sankt-Petersburg, Geneva arrangements reached and not completed following the April war. Azerbaijan was consistently attempting to avoid them with those arrangements implying an internationally controlled and transparent mechanism, which would allow to record ceasefire violations and fix the culprit. Official Baku rushed to take advantage of  Dushanbe arrangements – oral and through bilateral format without international community engagement, to get rid of the previous ones. At a point attention shift from them led to overlooking those arrangements and the question remains: can they be brought back to the table or can it be considered that Azerbaijan succeeded in this issue.

Another thing is if Pashinyan, during his press conference recently did not rule out the possibility of prisoner exchange, in the first place given the necessity of returning Karen Ghazaryan, after the meeting he stated that if exchange is not possible then at least their family members should be given a chance to visit their captivated relatives. So exchange scenario in this stage seems not probable. Instead the statement stresses the necessity of “humanitarian measures.”

To sum up, the talks and constructive dialogues are necessary in the light of peacekeeping in the region. However talks can’t stay at the level of notifications and clarifications.  Content related and clear cut steps will gradually become pressing. At this stage, the Armenian sides will need flexibility, cautiousness and calculated policy to push the interests of Armenia and Artsakh. Important will be to use perceptible and acceptable arguments  first and foremost to the mediators and the international community, which will provide their support and reinforce our positions.