I ‘m Going to Stay in Sports for a Long Time 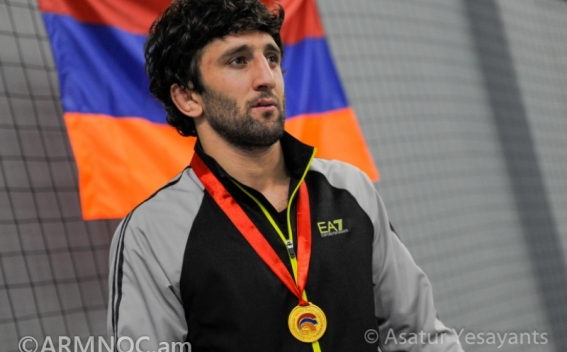 In the final of the 65 kg weight class of the Armenian Freestyle Wrestling Championship held at Gazprom Armenia Sport Complex on 25-26 November Valodya Frangulyan, a 2015 European U23 champion, 2017 European bronze medalist, faced Vazgen Tevanyan, a 2019 European U23 champion. It was one of the most expected bouts of the championship. Frangulyan had a volitional victory, 6:2 (at the beginning he was losing 0:2) and became Armenia’s champion.

In a conversation with the ANOC press service Valodya Frangulyan told about his victory, his return to the mat after a surgery and goals.

“The championship went well for me. I did what I expected and became a champion. I knew all my rivals but concentrated on the correction of the mistakes made in the past. I was also well-prepared for the bout with Vazgen, “the wrestler said.
A year before the Armenian Championship Valodya Frangulyan underwent a shoulder surgery. The wrestler is sure he wouldn’t be able to continue performing properly without surgery.

“Before the surgery I understood I couldn’t achieve success in that condition because the pain impeded my routine trainings. I’m glad the surgery helped and I took back the title of Armenian champion a year later,” he said.

“He is a good friend and worthy rival for me. There are many good wrestlers in our weight class, and it provides competition and makes us be alert and gives impetus to move on.”

Armenia still doesn’t have an Olympic qualification in the 65 kg weight class. In general, the competition in this weight class is very high in the entire world. Valodya Frangulyan is 27 but doesn’t share the opinion that it will be difficult to fight for Olympic medals at his age.

“I don’t care about the opinion of many people, I'm not going to respond to them because everyone thinks the way they want. I'll just say one thing: I’m going to stay in sports for a long time. As for the chances of going to the Olympics, to be honest, I don't think about it, I train every day trying to get stronger and to learn new things. I will do my best to achieve my goals, and my goal is to become a champion,” he said.

“Besides my personal coach, Petros Mkrtchyan has been training me for 6 months now, and I am very pleased. I want to thank all my coaches for their work.

At the end of the conversation, Frangulyan did not rule out that after the wrestler's career, we may see him in mixed marital arts (MMA).

“I don’t want to go ahead of time, but I don’t exclude it, “he concluded.