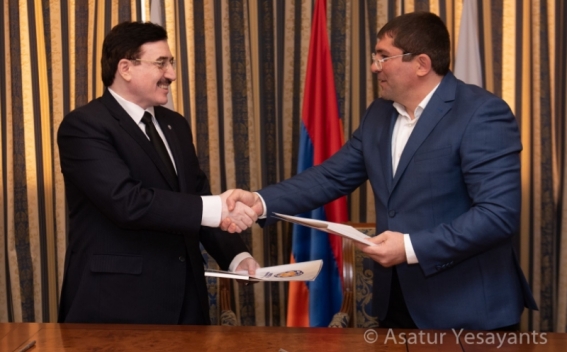 After signing the memorandum President of the Arab Wrestling Federation, Bureau Member of UWW(United World Wrestling), Qatar’s Zamel Sayyaf Al Shahrani who was visiting Armenia these days said that Armenia claims to become a wrestling centre in the region. Zamel Sayyaf Al Shahrani noted that he had long wanted to visit Armenia and become acquainted with the conditions.
“I wanted to see your infrastructure. Actually I’m pleasantly surprised. I haven’t seen anything like this in other countries. Your conditions are even better than those of South Korea. 22 countries are included in our federation, 18 of which are active members. The signed memorandum will allow our athletes and coaches to visit Armenia and train here. If everything goes well we plan to turn Armenia into a wrestling center with the UWW. The UWW president is also aware of my visit and the copy of this memorandum will also be sent to him so that its implementation will be under the control of the International Federation,” Al Shahrani said.
Earlier on 10 December Zamel Sayyaf Al Shahrani had visited Olympavan and Tsakhkadzor General Sport Complex with President of the Wrestling Federation of Armenia Robert Khachatryan and Secretary General Arayik Baghdadyan. They had toured the complexes and had become acquainted with the conditions, gyms and the hotel.