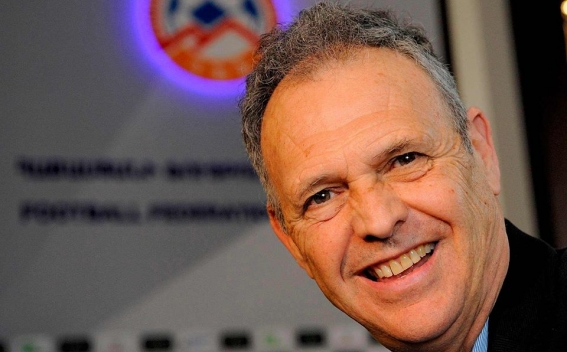 -Mr. Caparros, it has already been 3 weeks since you are appointed as Armenian national team head coach. Despite you had to leave for Spain due to the coronavirus pandemic, we know that you are busy with  studying our national team on a daily basis. What conclusions have you come up with?

-I’ve watched the last games of the national team and now we evaluate and analyze every player individually. My assistant Luciano prepares video materials for me. We analyze every action of the team, the game in different aspects, collaboration between the lines, individual performance of the players in different positions and other components of the game.

-In the past qualification phase our national team had some impressive victories. What was in the basis of that success?

-Dedication, team spirit, and mentality. Overall, I can say that our team must have mentality of a winner and be brave on the pitch.

-Which aspects of game need to be improved?

-It’s obvious that the boys are technically well prepared. Most of them play in high quality leagues. We have a good national team, although there’s always room for improvement. Now we analyze every game of the national team and every player to understand what level of game we have and what hopes we can have.

-Our team plays much better with stronger opponents and often has difficulties playing against weaker teams. What is the reason?

-I think that it’s due to the mentality. We need to inseminate the consciousness that there are no strong or weak opponents and that each game, even the friendlies, are very important. Every game needs to be treated as a final.

-You have discovered a lot of new talents and revealed their potential to the football world during your coaching career in Spain. Do you have plans to bring new, young players to National team squad?

-We’ll always be in touch with the coaches from junior NTs, and we’ll do our best to bring the best players to the senior National team.  I’m collaborating with U-21 team head coach Antonia Flores now. He gives me information and a lot of video materials about U21 players. When tournaments  resume, I’ll watch them in an action.

-Are there any players who will play for the National team for the first time?

-We follow all the players from Armenia and abroad. The most important thing is that they are eager to wear the NT jersey and represent their country.

-Did you already speak with any of our National team players?

-I wanted to speak and discuss things to all of them, but couldn’t because of the circumstances.  I spoke to Henrikh Mkhitaryan, watched his matches. He is not only talented, but also a great person. He’s a true leader and dedicated to his country and national team.

I also spoke to Arshak Koryan. He is also inspired by the idea of joining our team. He told me that he always wanted to join Armenian National team, but the problematic issues regarding “foreign players limit” stopped him.

-Is there any clarity about your coaching staff?

-My experienced assistant Luciano Toscano, Suren Chakhalyan and Roman Berezovski will help me in Armenian National team. We’re also waiting for Javier Minano to join us. If there are any problems, we’ll consider another candidate for that position.  All the junior national team head coaches are also members of the senior National team coaching staff. We all need to do everything to have a good result.