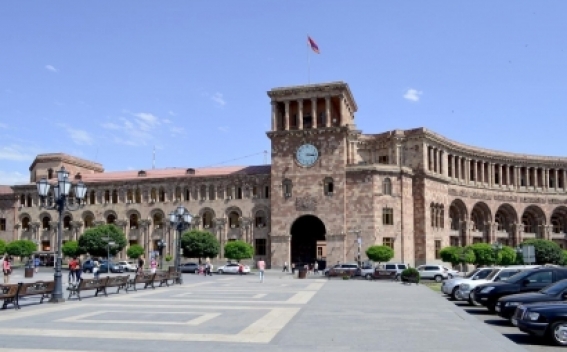 Before discussing the agenda, Minister of Healthcare Arsen Torosyan provided statistics on COVID-19 situation in Armenia. 577 new cases were recorded on July 11, 182 - on July 12 to bring the total number to 32,151. The Minister reported 650 patients in extremely serious condition. 43 patients are connected to lung ventilators. Arsen Torosyan further advised that as of 9:00 am on July 13, there is no citizen waiting at home, there is only one citizen who should be transferred from a regular hospital to a specialized center. The Minister considered it expedient to extend the state of emergency for at least another month.

The Government suggested extending the state of emergency until 17:00, August 12, inclusive. The decision was eventually adopted considering that the circumstances that had led to the declaration of a state of emergency on March 16, 2020 are still in place in the Republic of Armenia.

Minister of Justice Rustam Badasyan presented the amendments to the decision on extension of the state of emergency. “In particular, the decision on self-isolation may be issued orally, but it can be made in writing upon the addressee’s request. Exceptions are also made for cases of self-isolation violations, when a person visits medical facilities and service facilities in accordance with medical instructions for laboratory diagnostic tests,” the Minister said.

Prime Minister Pashinyan noted that the Armenian Constitution stipulates the taking of emergency measures in case of dangers threatening people’s health. “As a matter of fact, the state of emergency is the most effective tool envisaged by law. And consequently, if we fail to extend the state of emergency, the whole system of anti-epidemic action will be invalidated. That is why we just need to extend it. But on the other hand, we understand that the state of emergency cannot be rolled over indefinitely. For a month now, we have been working to develop a legislative package that would allow us to use this toolkit in emergency situations. It will be “much lighter in weight” in terms of restrictions, that is, it will be guided by the logic of targeted anti-epidemic measures. Why did we not start drafting that legislation, for example, in March, because the forecasts for March were different, we thought that the epidemic would last a few months, and that the epidemic would have disappeared before that legislation was drafted. But things went wrong. This new toolkit should be used in a way to save us the trouble of extending the state of emergency in case of continued pandemic.”

Rustam Badasyan noted in this connection: “Being developed by the Ministry of Healthcare, a relevant package will be submitted for further probe. When applying this legislation, we will have to see whether it will be possible to control the situation with this toolkit, or there is a need for tougher measures, that is, a state of emergency. However, I would like to inform you that all those rights restricted in the state of emergency can equally be restricted through by-laws. Of course, we will have some easing in terms of volume, so we have to assess whether we can achieve the desired result with softer means,” the Minister said.