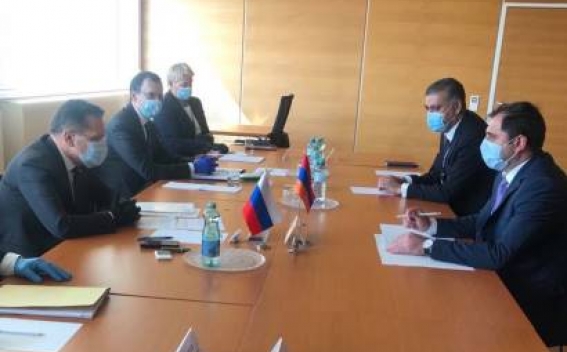 Minister of Territorial Administration and Infrastructure of Armenian Suren Papikyan today had a meeting with Director General of ROSATOM State Atomic Energy Corporation of the Russian Federation Alexey Likhachev on the sidelines of the 64th session of the General Conference of the International Atomic Energy Agency (IAEA), as reported the Ministry of Territorial Administration and Infrastructure.

Issues related to the course of implementation of the program for design operation of the active energy block of the Armenian Nuclear Power Plant were discussed during the meeting.

Minister Papikyan touched upon the details about the joint activities for modernization of the nuclear power plant through budgetary loan granted from the State Budget upon the decision of the Government of Armenia.

The interlocutors also discussed the issue of completing the actions provided for by the framework agreement concluded with ROSATOM Service according to the prescribed timetable. Taking into consideration the role of the Armenian Nuclear Power Plant in Armenia’s energy system, the parties expressed willingness to earmark the possible directions for cooperation with ROSATOM.