Likud Party: Any Territory That You Vacate Will Be Used for an Armed Islamist State Against Us 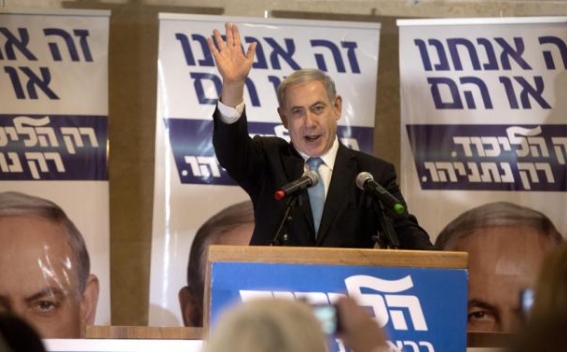 The Likud Party (consolidation in Hebrew), which is headed by the current Prime Minister of Israel,  Benjamin Netanyahu is the first right-leaning party to lead the Israeli government.  The Likud Party was established in 1973 and at the beginning included a group of both left and right-wing parties such as Herut, Liberal Party, Free Center, National List, and Labor Movement for Greater Israel.   The party came to power in 1977 as a result of the elections that were referred to as "Upheaval", when right wing won the power.

The main pillar of the Likud party ideology is the security of Israel. Likud views the territories surrounding it (West Bank and Gaza) to be essential component for Israel’s security. The uncompromising stance of the party on present possible territorial concession also derives from the fact that those territories are viewed  as part of "Biblical Israel" and accordingly rightful property of all Jews. Commenting on possible territorial concession Israel Prime Minister particularly noted in an interview given to Times of Israel: "The goal (of avoiding a binational state) stands, but in the current circumstances in the Middle East, any territory that you vacate will be used for an armed Islamist state against us".

Although Israel agreed to negotiate Oslo Accords with  Palestinian Liberation Organization (PLO), which presupposed  "the idea of trade land for security" in reality the actions of the party give space for suspicion. The Likud party advocates the expansion of settlements on these lands and is for maintaining a united Jerusalem and the Golan Heights under full Israeli sovereignty.

As for refugees Netanyahu’s party continuously opposed the "the right of return" of the Palestinians to the territories of  present state of Israel, contending that  it will pose a real security threat for the existence of Jewish state. For the Israeli present government the Palestinian refugees can enjoy their "right of return" only in the final stage of negotiations, to the newly established state of Palestine.  In spite of this  on different stages of negotiations Netanyahu and Israeli negotiation team  agreed to allow the return of a number of Palestinian refugees to the state of Israel  under the family reunion.

For Likud another important security is the factor of Iran and its possible nuclear possession. As it is well-known, the present Israeli government opposes any deal between the six and Iran that will presuppose concessions of the international community towards Iran. In the same  interview to the Times of Israel Netanyahu particularly noted:

This kind of  radical stance of the present Israeli government against Iran nuclear negotiations became one of the main reasons in the recent deterioration of long-time Israeli-US cordial relations.

Aside from security the election platform of the Likud party claims for "free market economy with social sensitivity, budgetary discipline, lowering taxes, an effectively managed stock market and growth of the private sector, ending the housing crisis and improve benefits for the self-employed."