Statement by the President of the Republic of Armenia Serzh Sargsyan at the Meeting of the European People’s Party Eastern Partnership Leaders: Full Text 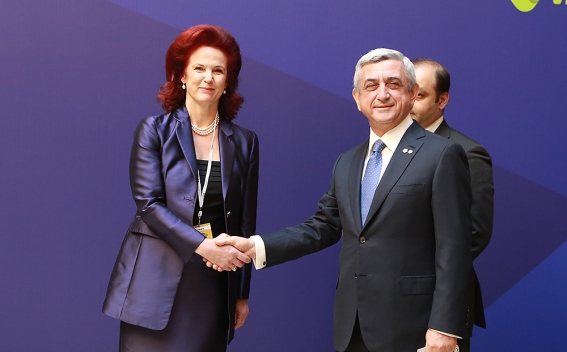 The press service of the RA President Administration relaxed the statement of the President in the meeting. Below is full text.

At the outset, I would like to thank President Daul for the invitation to partake in the meeting in this format and for excellent organization of this meeting.

Armenia’s European agenda remains our foreign policy priority, and we are committed to deepen and further consolidate our cooperation with the EU. The Eastern Partnership is not going through an easy time right now, but we do not think that it exhausted itself or it is doomed. Basically, the situation ought to be realistically assessed in order to continue anew the journey we embarked upon jointly in Prague. Indeed, the three Partners’ relationship with the EU are on one level, while the rest is on other, which stem from the peculiarities of their respective situations. Hence, one needs to fathom what is the pivot that connects the Partners and European Union in new circumstances? What around the cooperation will be built?

It is important to preserve the characteristic and common features, which unite us in the Partnership. We strongly believe that such a commonality shall remain rooted in the adherence of the all Partner States to shared values, such as development of democracy, human rights, rule of law, and ensuring peace and stability in the region. Therefore, our future cooperation shall continue to be rooted in our adherence, in good faith, to build and develop democratic societies and institutes, fight against corruption, conduct of free and fair elections, independence of judiciary, and establishment of a market economy based on free competition.

We, meanwhile, welcome that “Towards New European Neighborhood Policy” concept paper presented by the European Commission addresses the requirement to take into account the real needs of the Partner States and to display tailor-made approaches, which indeed would contribute to discovering new avenues and perspectives for cooperation with the EU.

We are of the view that any given Partner’s membership to any structure does not limit its cooperation with other structures. It is for that reason that Armenia, while acceding to the Eurasian Economic Union, continues to be committed to deepening and expanding relations with the EU.

With its balanced policy Armenia has not only avoided setting a new hotbed of tension in the current complicated circumstances of the European geopolitics, but it has also managed to build its policy on the premises of compatibility, equilibrium and multi-vectored cooperation with different integration systems.

These very principles will serve as a basis for the envisaged legal document to govern relations between Armenia and EU, for conclusion of which we count on your support.

These very principles will serve as a basis for the envisaged legal document to govern relations between Armenia and EU, for conclusion of which we count on your support.

It has been for a long time that worrying developments in a Partner country, Ukraine, caused a serious crisis. Comprehensive settlement of the state of affairs in Ukraine is of primary significance both for the future of the country and for easing  the current international tension. I hope that the farsighted attitude correctly appraising the situation will win over here as well; solutions will be found to respect mutual concerns, and the only stable avenue will be paved for mutual understanding; and, throughout every stage of these processes joint endeavors leading to comprehensive settlement will prevail over dissemination of one-sided fault-finding public statements, a temptation that leads nowhere. Unfortunately, I detect such signals also in the EPP declaration of today, on the several paragraphs of which we have not been able to reach consensus. In my view, the basic reason of that was that the EPP partners have not been fully engaged in the drafting exercise.

While discussing issues pertaining to ensuring cooperation and security in the European area, I cannot but address the Nagorno Karabakh conflict, which continues to be one of the most serious challenges both to our regional and European security. Azerbaijan has not ceased resorting to its usual practice of provocations, threats and anti-Armenian propaganda, thus protracting the conflict settlement process. The anti-Armenian campaign in Azerbaijan is coupled with egregious human rights violations, and it has been a while that the opponents to the regime are labeled as Armenian spying agents.

The irresponsible steps of Azerbaijan, which threaten the security of the region we share, should not go unnoticed by our European partners. Those steps deserve adequate assessment. Hence, I urge not to pay tribute  the current non-constructive initiatives of Azerbaijan in various international platforms, and by that avoid sharing responsibility with the latter for increasing tension in our region

Availing myself of this opportunity, I again express gratitude to the EPP Political Assembly for adopting Resolution dedicated to the Armenian Genocide Centennial on March 3, 2015 titled  “The Armenian Genocide and European Values.” I highly value contribution of the EPP and President Daul in person to the adoption of the April 15 Resolution condemning the Armenian Genocide by the European Parliament, which testifies unambiguous position and commitment to the universal values of the European family of nations. Je vous remercie, Monsieur Daul, for accepting my invitation to Yerevan, for joining us to deliver globally message “Never again.”

Throughout the recent months our European agenda had been intensive with a number of events. Among those I shall pick out the Fourth Ordinary Session of the Eastern Partnership EURONEST Parliamentary Assembly held in March in Yerevan, as well as the Ministerial Summit of the European Higher Education Area also known as Bologna process that took place last week.