Azerbaijan And European Union at Odds 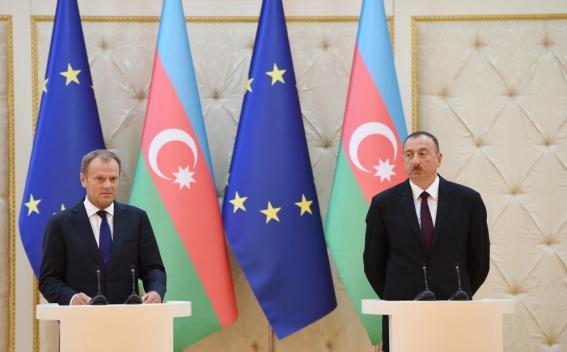 Azerbaijan does not succeed in enshrining the desired wording in its documents with the European Union. This is evidenced by refusing to sign the EU-Azerbaijan agreement on May 13 and the use of veto by Baku on the EaP 10th anniversary joint protocol.

The reason is Baku's aspiration to fix the territorial integrity of Azerbaijan in those documents.

Azerbaijan seeks to achieve a point where the EU will enshrine in its official position the sovereignty and territorial integrity of Azerbaijan, involving the Artsakh conflict. It is no coincidence that on the threshold of the 10th anniversary of the Eastern Partnership events, the speaker of the Milli Mejlis Oktay Asadov stated that the agreement on strategic partnership between the European Union and Azerbaijan is ready for signing and will be signed on May 30. Moreover, he pointed out that the agreement stipulated "violation of the territorial integrity of Azerbaijan due to Armenia's occupation".

However, the agreement was not signed in Brussels on May 13. Moreover, in Brussels both the Azerbaijani and European sides declared that the coordination process was not over. "We are still working on the EU-Azerbaijan agreement and we have not finished it yet. I do not want to comment, but be sure we are well aware of all the differences," said European Commissioner for Enlargement and European Neighborhood Policy Johannes Hahn at a press conference, referring to the Armenian side's demand that the wording of the agreement with Azerbaijan not be different from the Armenia – EU agreement principles.

In addition Azerbaijan vetoed the protocol of the 10th anniversary of the Eastern Partnership, which was intended to be published on behalf of the European Union and Eastern Partnership countries. As a result, the document was published only on behalf of EU Commissioner Federica  Mogherini. The European Union sufficed with reference to the final documents of the previous EaP summits.

It is to be noted that the wordings of the Artsakh conflict of 2015 and 2017 did not please Azerbaijan either. As a result, Azerbaijan signed the final protocol of 2015 with reservations, and in 2017 it was decided not to mention the names of conflicts.

These developments show that Azerbaijan's maximalistic and non-constructive approaches are unacceptable and incomprehensible for the European Union, which leads to such controversies, delays and vetoes. However as it is known, the European Union is interested in the development of cooperation with Azerbaijan in the field of energy, and the question still remains - what will ultimately prevail, the interests or values?

In this regard the Armenian side also has things to do, to be consistent in working with the European Union and prevent ignoring the values ​​for the sake of interest.