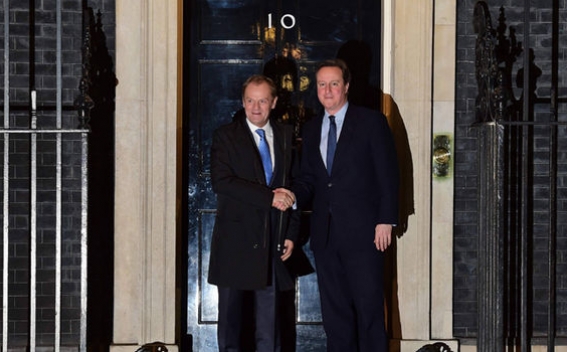 Prime Minister David Cameron and European Council President Donald Tusk failed on Sunday to reach a deal on Britain's EU renegotiation after talks in London, but agreed to another 24 hours of "crucial" discussions.

As Reuters reports, the meeting was seen as vital to finding agreement on Cameron's demands for measures to curb migration into Britain -- the most difficult of four areas he wants to renegotiate before holding a referendum on EU membership by the end of 2017.

Both sides need to agree the main points of a deal before other EU leaders iron out the details at a summit on Feb. 18-19. If agreement is reached then, Cameron could hold the referendum as early as in June in a vote which will determine Britain's future role in world trade and affairs, and also shape the EU.

The UK main goal is to decrease migration within the European Union while finding a way to curb migration has proved to be the most troublesome element of Cameron's renegotiation which also included another three areas of concern, BBC writes.

It should be recalled that UK four main aims for renegotiation were Integration: Allowing Britain to opt out from the EU's founding ambition to forge an "ever closer union" so it will not be drawn into further political integration

Benefits: Restricting access to in-work and out-of-work benefits to EU migrants. Specifically, ministers want to stop those coming to the UK from claiming certain benefits and housing until they have been resident for four years

Eurozone v the rest: Securing an explicit recognition that the euro is not the only currency of the European Union, to ensure countries outside the eurozone are not disadvantaged. The UK also wants safeguards that it will not have to contribute to eurozone bailouts.

However Eurosceptics have blasted the entire renegotiation project as a "trivial" exercise which will not fix the problems with the UK's membership.