The EAEU in the Context of Regional and Global Processes 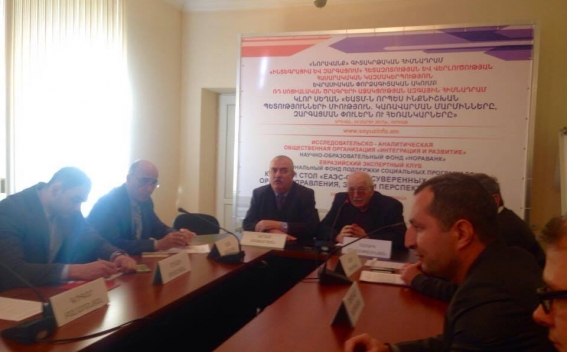 On March 24, a roundtable discussion was held at the Noravank Science and Education Foundation on the topic "EAEU - Union of Sovereign States: Government Agencies, Milestones and Prospects for Development." The tendencies of the development of the EAEU, the main benefits of Armenia's participation to the EAEU, the issues of harmonizing the legal systems of the member countries of the organization, etc were dscussed.

The opening speech was made by the director of the Noravank Scientific and Educational Foundation Gagik Harutyunyan and the chairman of the NGO “Integration and Development” Aram Safaryan. Organizers of the round-table discussion are NGO "Integration and Development", the Noravank scientific and educational foundation, the Eurasian expert club and the National Fund for Support of Social Programs of the Russian Federation.

In his opening speech Gagik Harutyunyan noted that a lot has been said lately about possible alternatives to Eurasian integration. "There is always an alternative, but the question is how profitable it is for us," Harutyunyan said, stressing that it is important to have a detailed view of the EAEU before talking about alternatives and interests.

Aram Safaryan in his turn appealed to the students, masters and post-graduates studying in the field of international relations and world politics who participated in the roundtable, emphasizing the importance of such events as an opportunity to get acquainted with the expert scientific assessment of current processes.

In his report, Ashot Tevikyan presented the main institutions of the EAEU, their functions and role. "The bodies of the Union shall operate within the limits of the powers conferred upon them by the Treaty on the EAEU and international treaties within the Union.The chairmanship of the Supreme Council, the Intergovernmental Council and the Council of the Commission is carried out on a rotational basis in the Russian alphabet by one Member State during one calendar year without the right of prolongation,’’ Tevikyan noted.

Speaking about the issue of changing the legal system of the EAEU members after joining the union, Grigor Balasanyan noted that economic integration necessarily implies a convergence of the legal framework. "The timeliness of the formation of a new, Eurasian legal field protected from those norms of international law that have come into conflict with national legal systems was confirmed in case of Russian Federation." Russia and its partners in the CIS and the EAEU proved to be self-sufficient and fairly stable subjects of international law, and the Eurasian economy is quite legally protected from sanctions and other repressive measures", Balasanyan said. He stressed that for successful integration, a legal framework is needed that will include three components harmoniously complementing each other: the national legal level, harmonized with the legal acts of integration education, forming its second level and harmonizing the regional legal system with the global system of regulation of economic and trade relations.

Summarizing the results of the round table, Ashot Tavadyan spoke about the combination of global and integration processes and their economic component. "Globalization and regional integration can be instruments for achieving faster economic growth rates, depending on which specific mechanisms and factors they both depend as development conductors." Globalization expands opportunities for export-import operations, technology exchange, while the regional economy, for example, at the same time can generate effects that contribute to economic growth by reducing transport costs and various optimizations of interaction between market actors."

The expert expressed the opinion that regionalization in Eurasian territory, as practice shows, becomes more adequate economic policy than globalization. "The formation of a unified regional economy implies not only the creation of unified governing bodies and coordination of actions of the countries participating in Eurasian economic integration, but also the transfer of all national economies to fundamentally new rails, that is their reorientation to the internal Eurasian market," Tavadyan concluded.

Experts also agreed that cooperation between various integration unions, including the EU and the EAEU, is of great importance, and the policy of combining the two integration vectors adopted by Armenia can give some certain results.