The Eurasian Space Is Not Simply a Bridge Between Europe and China, but a Self-Sufficient and Distinctive Space 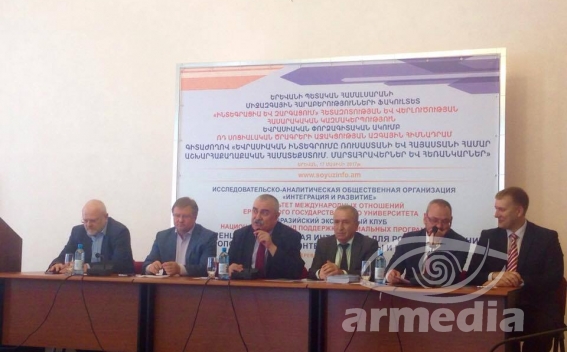 On May 18 a conference on "Eurasian integration for Russia and Armenia in the geopolitical context: challenges and prospects" was held in Yerevan State University. The results of the pilot project on the introduction of the subject of Eurasian studies into the curriculum of undergraduate and graduate students at the Faculty of International Relations of the Yerevan State University were summed up.

The organizers of the project are research-analytical NGO "Integration and Development", the Eurasian Expert Club, the Faculty of International Relations of the YSU and the National Fund for Support of Social Programs in Russia.

As one of the authors of the course, director of the Institute of the EAEU Vladimir Lepekhin noted, "Eurasian integration is not only a union in the economic sphere, but also in culture, politics, information, etc. We all tried to describe this in twelve lectures." The course of lectures was presented to the Ministry of Education and Science of Armenia, which in the future will decide to introduce the course as a mandatory or optional subject in universities. The course was developed by the Russian-Armenian team, with the support of the National Fund for Support of Social Programs of Russia. It was first introduced in Armenia, and if it succeeds, will be further offered to other countries of the EAEU member states, as well as those states that are interested in the processes of Eurasian integration.

The chairman of the NGO "Integration and Development" Aram Safaryan stressed that the collection of lectures compiled on the basis of this course was a great success and was distributed also outside of Armenia. "The collection was compiled on the principle of flexible modules to enable us to update and deepen the set of knowledge on the Eurasian integration included in the course," Safaryan said. He stressed the importance and effectiveness of the course also for young professionals and journalists who participated in the round tables held at the "Noravank" Foundation as part of the project. "The most important thing it that with this course we want to stress that the Eurasian integration is an economic process, the aim of which is to form a single economic area. But we also want to show that if there is no civilizational community of the post-Soviet countries, no integration process can succeed. Our goal is to explain to the students that the Eurasian space is not a simple bridge between Europe and China, but a self-sufficient and distinctive space that possesses such civilizational values that is worth fighting for," Safaryan said.

During the conference, reports were made by the Director of the Institute of the EAEU, the member of the Scientific Council on the Problems of Eurasian Integration of the Russian Academy of Sciences, the candidate of philosophical sciences Vladimir Lepekhin, independent economic and financial expert Ivan Anisimov and the head of the department of theory and history of political science of YSU, the doctor of political sciences, the member of the Eurasian expert club Ashot Yengoyan.

"Formation of multipolar world is taking place and the Eurasian space should become (and already becomes) one of the poles," Vladimir Lepekhin said in his report.

Ivan Anisimov highly appreciated the importance of the course on Eurasian integration. "This is the first scientific and comprehensive attempt to approach the processes of Eurasian integration," he said. In his report, he referred to the EAEU single currency and the cooperation of member countries.

"The single currency will appear when it is necessary," Anisimov said, adding that the introduction of a single currency would have a negative impact on the union, if this is done hastily and would not reflect the objective process of integration of economies.

Ashot Yengoyan, in turn, turned to the ideological, civilizational and value basis of the Eurasian space. "Whatever the economic preferences of the countries in the Eurasian Union, today it is necessary to find the ideological and political basis that justifies the attractiveness of the future union and directs practical policy. It is the weakness of such an ideological system that raises doubts among certain citizens about the viability of this integration union," Yengoyan said.

The speakers of the conference answered the questions of the students who were studying at the mentioned course.