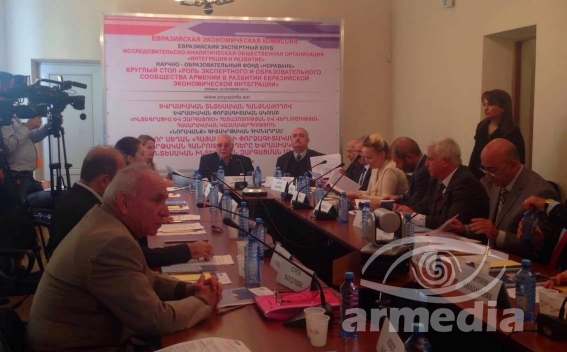 The decision of Armenia to become a member of the Eurasian Economic Union (EAEU) is conditioned by its economic connections with the Russian Federation (RF), and the current tendencies of the economic development in Armenia prove the rightness of that decision. The main achievement of Armenia in the EAEU, the tendencies of the development of the Union, existing problems were discussed during the round-table discussion under the title "The Role of Armenia’s expert and educational community in the development of Eurasian economic integration" in Yerevan on October 24.

The round-table discussion was initiated by Eurasian Economic Commission (EEC), NGO "Integration and Development", "Noravank" foundation and Eurasian Expert Club. The leading experts in the sphere of Eurasian integration participated in the discussion.

The Chairman of the NGO "Integration and Development" Aram Safaryan and Assistant to the President of the EEC Board Yulia Chalayan delivered opening speeches highlighting the importance of such events in terms of exchanging opinions between EEC representatives and expert community, discussing new ideas and developing important theses.

Doctor of Economic Sciences, Professor, member of the Eurasian Expert Club Ashot Tavadyan in his speech noted that Armenia’s membership to the EAEU had increased the competitiveness of the Armenian goods in the markets of Russia and other EAEU countries, while the difficulties connected with the crisis are being overcome. At the same time Tavadyan noted that there are still a number of shortcomings that need to be overcome, such as high level of corruption in member states, low level of discipline in implementing contracts, non-coordinated  macroeconomic policy, etc.

Assistant to the President of the EEC Board Yulia Chalayan, in her turn, referred to the existing discourse on Armenia’s membership to the EAEU among the Armenian expert community, noting that "despite the politicization of the discourse, the membership is explained by economic preconditions." According to her the decision was a result of continuing increase of the exports to Russia, Russian big investments as well as cross-border exchange of currencies.

Tatul Manaseryan, Doctor of Economics, Professor, Head of the "Alternative" Research Center, member of the Eurasian Expert Club, also spoke about the benefits of Armenia's membership to the the EAEU. The expert paid attention to the economic activity, recorded in Armenia in the period of January-September (2017), as well as rapid growth of external trade compared to the same period of the previous year. According to him in the first nine months of 2017 the index grew by 21.7%. The volume of the export of goods and service from Armenia increased by 19.1%, while the imports - by 23,2%. The money transfers from Russia increased by 18 % for August, as compared to the same month of the previous year.

The participants of the round-table discussion paid special attention to the development of energy sector in the framework of the EAEU cooperation. Leonid Shenets, Director of the Energy Department of the Eurasian Economic Commission, underlined the importance of increasing the efficiency of electricity production, the need of employing more saving methods. "The EAEU states have much bigger potential of electricity supply, but they use much more resources on them than Western countries."

The round-table discussion participants emphasized the productiveness of the discussion and the need to continue the cooperation in this format.