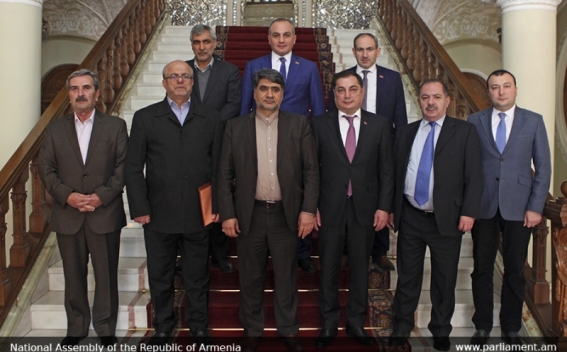 On December 12, RA NA Armenia-Iran Friendship Group delegation had meetings with the Head of the IRI Majlis Iran-Armenia Friendship Group, the Heads of the Committees on Economic Affairs, on Energy, on Foreign Relations and on Defense, official page of RA NA rports.

During the meetings multi-layered issues of the Armenian-Iranian cooperation were discussed, particularly, the cooperation in the spheres of economy, energy, foreign policy and security.

Within the framework of the economic cooperation the sides discussed issues relating to the works of the economic free zone being created in Meghri and the possibilities and the further organization of the activities. The sides particularly touched upon the Iranian and the Armenian goods turnover, and by the mediation and support of the Armenian and Iranian sides in other markets.

In the sphere of energy issues regarding the construction of the third energy line were discussed. The sides have recorded that the preparatory works are over and the phases of the final design and construction should follow. Certain agreements on the issues of the organization of the gas purchase process from Iran to Armenia were reached. The parties agreed to create joint working groups which should be engaged with the solution of the concrete problems, involving in them the representatives of the spheres of the two countries’ executive powers and business sphere. It has been designed to hold multilateral forums by the initiative of the parliaments of Armenia and Iran.

The representatives of the IRI Majlis have assured that the Iranian legislation is liberal which gives wide opportunity to deepen the effective cooperation in the debated spheres. It has been reaffirmed that the Iranian side is ready to debate and create new opportunities in all spheres.