Wine Can Become a National Armenian Brand for Export 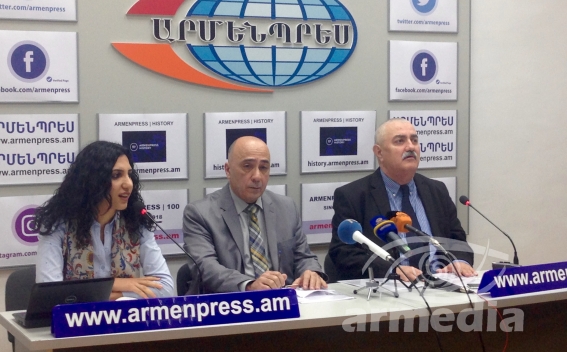 Experts summed up the results of 2017 on economic development, presenting the results of an interim expert study conducted by the members of the club, Ashot Tavadyan and Tatul Manaseryan.

Aram Safaryan noted that in 2017, compared with the same period of the last year, economic activity increased by 7.7 percent, which is the highest indicator for the entire region. "The growth in construction reached 3%, double-digit growth was registered in the agriculture sector, and it is important to understand the reasons for this," Safaryan said, while also noting that the export of agricultural products increased.

Aram Safaryan noted that the year 2017 was distinguished by the development of new export industries, the most important of which is winemaking. "It is known that the main Armenian products that enter the Eurasian markets are high-quality Armenian cognac, which is a national brand and is exported mainly to Russia, Belarus and Kazakhstan, but in 2017 Armenia exported to these markets more than 1.2 million high-quality wines. This gives grounds to assert that if these trends continue for the next two years, Armenian wine will become the second brand after cognac," he said. According to the expert, exports to Russia of clothing and footwear have also grown significantly. In addition, in 2017 a record was reached in the tourism sector, at the expense of the increased flow from Russia, which is the result of the permission for Russian citizens to enter Armenia by internal passports.

According to experts, the year was good for the Unified Energy System, the unemployment rate on the territory of the Union was significantly reduced, stabilization is observed in the Russian market, which has a positive effect on the small economies of the EAEU. Transfers to Armenia from Russia also grew.

Ashot Tavadyan stressed that export of ready products is especially important for the Armenian economy. "In 2017, for the first time, we exceeded the barrier of sensitivity of 2 billion," the economist said, explaining that the quantitative growth of exports will go to high-quality when exports from Armenia exceed 3 billion. And for this, it is necessary to develop a road map.

The economist stressed that integration processes contribute significantly to the growth of exports. In particular, thanks to the GSP + system operating in the EU, Armenia saves about 9 million euros annually when exporting to European countries, and taking into account the EAEU norms and cheap energy resources received from the EAEU, Armenia saves $ 60 million when exporting to the EAEU countries.

"In terms of direct investments, we do not yet get the expected amount, mutual work is necessary in this direction," Tavadyan noted, pointing out that in 2018 Armenia should close a rather significant external debt, which will affect the economy.

Summing up, experts noted that 2018 is still well-off for agriculture, but much attention should be paid to export of ready products. It was also noted that in October 2018, the week of the EAEU will be held in Armenia, which will provide an opportunity to discuss the prospects for intensifying and expanding mutual trade and find solutions to existing issues.