The Armenian Love of Aivazovsky 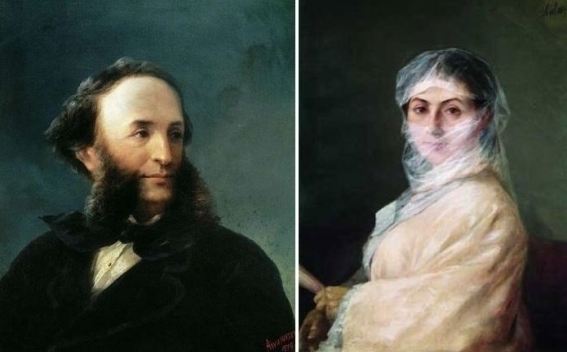 "My soul must constantly absorb beauty, then reproduce it in pictures. I love you, and from your deep eyes a whole mysterious world is shimmering for me. And when I cannot remember your features in the silence of the workshop, the picture becomes very dull..."- that is how great artist Ivan Aivazovsky talked about his love Anna Sarkizova, a woman who gave him 18 years of a happy married life.

Only about three of Aivazovsky's beloved ones is known: two of them were his wives, while the story of the third one could be a legend. A beautiful story about the ballerina Maria Taglioni, an unhappy marriage with Julia Grevs and a happy late love with Anna Sarkizova: that's all that is known about Aivazovsky's personal life.

Anna Burnazyan was born in 1857 in Theodosia in an Armenian family. She was famous for her beauty, so it was not surprising that she got quickly married to the merchant Sarkizov of Theodosia. But at 25 Anna became a widow. And it was at the funeral of her husband that the fate made her get acquainted with Aivazovsky...

Behind the coffin there was a widow, a lovely-looking young Armenian girl ... The moment, of course, was not the most suitable one, but the artist fell in love at first sight, Artchive.ru writes.

Waiting for proper time, Aivazovsky made a proposal that Anna accepted. And in 1882 Aivazovsky, divorced by the decree of the Echmiadzin Synod of May 30, 1877, No. 1361, from his first wife, entered into a legal marriage with Anna Sarkizova for the second time.

There was almost forty years of difference between them. But her natural tact and sensitivity warmed up their relationship. She loved him very much and did not require more attention than he could give. She understood that she would never occupy a place in his heart equal to the painting. Aivazovsky in turn adored Anna and was insanely jealous.

In the year of the wedding Aivazovsky drew the portrait of his wife in a national Armenian dress with a transparent silk kerchief on her head. Expressive dark eyes told about her intelligence, good manners and oriental grace, a soft smile complemented the calm femininity, giving her lightness and some mystery, Liveinternet.ru writes. But Anna's beauty inspired Aivazovsky not only to create portraits, he even devoted a poem to her.

"Thanks to this marriage, I became closer to my people," the artist often repeated. With Anna's appearance, Aivazovsky's house got alive and became a place of frequent gatherings: Armenian actors, writers, musicians, artists visited the happy couple, receiving blessings, and often some material support as well.

In 1900, Ivan Aivazovsky passed away. Anna had a lot to go through. For 25 years she did not leave the walls of the house, where she saw love and happiness. She missed the First World War, the Revolution, the Civil War, paid no particular attention to the dramatically changed conditions of life and suffered the disasters of expropriation. She even did not leave for the evacuation during the Second World War, she changed her last surviving jewels for bread and cereals. When the Germans left Theodosia, Anna was found by the artist Nikolai Samokish who took her with him to his house in Simferopol.

Anna died on July 25, 1944. She was buried next to her husband in the cemetery of the Armenian church of St. Sarkis, where the couple got married living the life that really made happy the Great Artist...