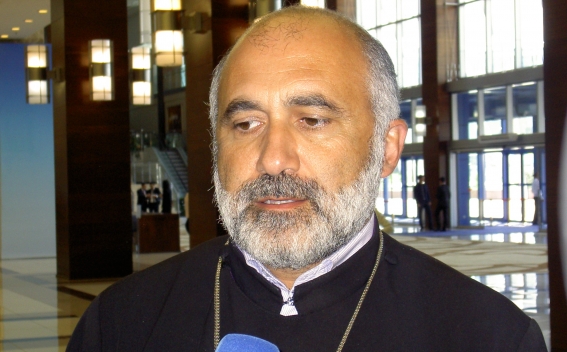 Armedia" IAA presents an exclusive interview with Bishop Markos Hovhannisyan, the leader of the Ukrainian Diocese of the Armenian Apostolic Church, a permanent member of the Secretariat of the Leaders of World and Traditional Religions. The Interview was conducted during the "5th Congress of Leaders of World and Traditional Religions" in Astana in the framework of "Armenia-Kazakhstan: Cooperation Platforms" project, with the support of Embassy of Kazakhstan in Armenia.

- Tell us, please, about the participation of the Armenian Apostolic Church in Leaders of World and Traditional Religions. What is the goal of our church in this forum?

- Participation of our church began with the Second Congress of the Leaders of World and Traditional Religions. Led by His Holiness Garegin II, the delegation of Armenian Church accepted the invitation and on regular basis takes part in the meetings of the organizing committee, called the Secretariat of the Congress. Assembly and Congress, and the Secretariat are held in an alive atmosphere and have a tendency to expand. After the 2nd Congress, the Secretariat had 12 members, and now twice as much as last time. The fifth congress is attended by more than 70 delegations, which indicates a trend of expansion of the Congress and its ideas.

The general format of the events is very interesting. On the initiative and proposal of the President of Kazakhstan Nazarbayev, the Congress is based on the principle of dialogue, and the dialogue is seen as a very important action. This is important for the whole world as the isolation won’t lead to overcoming problems.

- Astana brought together the representatives of different religions, and it is very inspiring. Could this be a message to the world, full of conflicts?

- At the opening of the Congress President of Kazakhstan noted that though the world is resolving many problems, those problems  become even more day by day. We, as Christians, know that in our life the problems will always grow, but there must be a will to face these problems and solve them. We must not bury our heads in the ground, and must openly challenge the existing problems, which is the main message of the Congress.

If you look at the past 15 years on the global scale, since the 1st Congress of Leaders of World and Traditional Religions, you can witness  increasing number of wars, and there also some financial crises emerged. So what do we do to overcome these problems? Congress may be considered as one of the attempts to solve them.  This is a tool, an instrument to see problems and solve them.

- In which way is the 5th Congress different from its previous ones?

- I see a change in the format: in addition to the religious leaders, now some prominent political figures are also involved.

- Can it be expected for the Armenian Church to continue to actively participate in the format of the religious summit?

- It is planned that the Congress will be a regular one, and Kazakhstan has always expressed readiness to hold them. We welcome this willingness. His Holiness Garegin II has shown his personal commitment demonstrating that our Church is always ready for such practical steps. We are always open to initiatives aimed at the peace, at improved relations between communities, countries and people. Being a traditional church that has its role and importance in world culture, we all together have to look for ways to solve problems and share experience in this useful mission.