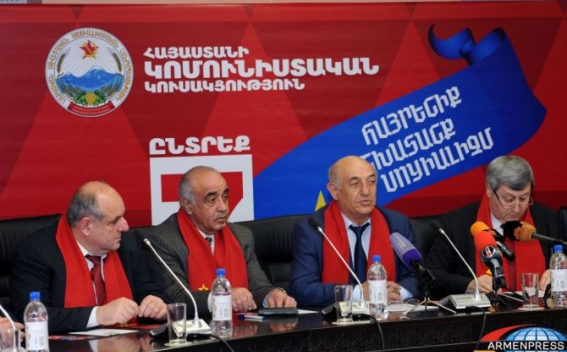 "Armedia’’ IAA presents an exclusive interview with the president of the Armenian Communist Party, Tachat Sargsyan.

- Will you, please, name the three main priorities of the foreign policy directions of your political power?

- As you know, Armenia has become a member of the Eurasian Economic Union. The Communist Party welcomed that step of our Republic’s government, taking into consideration the following factors. First, becoming a member state of the   (EAEU), safer conditions are ensured for the Republic of Armenia (RA), I mean the fact that the number of the EAEU population is 170 million and also the fact that for centuries Armenia has been with Russians. We think that we were, are and will be with Russians. Second, as an EAEU member, we regain the connections with the Soviet factories that we had during the Soviet government. Third, why not, new economic connections are gained.

There are people, who state that after becoming a member of the EAEU, the situation in Armenia has not become better. I should state that it is a new union, perhaps the existing laws do not work to a certain extent, which, however, is mainly the result of our governments non-flexible policy. As a member of the EAEU, the RA government should also have relations with the EU and other countries, which I should state, our government does.

Third prioprity of our foreign policy is Karabakh. It is true that NKR (Nagorno-Karabakh Republic) has become an independent state; however the pressure from the outside world has increased. Plus, Azerbaijan continuously delays and does not want to recognize NKR. One of the vectors of our foreign policy is the protection of Karabakh’s independence and it recognition in the future.

- What is your position on Karabakh conflict settlement process?

- Do you consider it possible to restore the Armenian-Turkish relations in the near future? What is the key to progress in this direction? And what steps should be taken for the international recognition of the Armenian Genocide?

- The memory of the people is not short. Those generations, who witnessed the massacre, keep “the consequences” of the Yeghern (Ed. synonymous with Armenian Genocide) vivid. It is Genocide by the full meaning of the word. The restoration of the relations with Turkey is not that easy and demands a consistent work both economic and political, international active relations with Europe, Russia… All these factors should contribute to the restoration of our relations with Turkey. Of course, there are not permanent friends and enemies; however the losses inflicted by Turkey are so huge that for restoration of the relations, huge and hard work is needed.

- What is your approach towards Armenia’s integration processes? How do you see the development of Armenia's bilateral relations with the US, the Russian Federation and with individual European countries?

- The membership to the EAEU resolves the issue of the RA’s relationship with Russia and the EAEU member states. What refers to the European countries and the United States, nothing prevents the government of the RA from having friendly political and commercial relations both with the US and the European countries. In essence, this is what is done.

- How do you see the development of the relations of the RA with the neighboring countries, particularly with Iran and Georgia? What steps are needed in this direction?

- I should state, that both Georgia and Iran are friendly states for us, and the relations with third countries cannot have an impact on our relations. Armenia conducts a very right policy both with Iran and Georgia.

- What are your political force’s views on regional security issues?

- How do you see the development of the Armenia-Diaspora cooperation? What should be the priorities of the overall agenda of this relationship?

- The relations with Diaspora were, are and will be at the highest level. Today, there are close connections, which are made stronger by the Ministry of Diaspora and by other official leverages. There are diverse and varied methods of work.

- What are your approaches to the processes that are ongoing in the Middle East and the policy of Armenia towards them?

- In any case we condemn all confrontations; our slogan is “peace in every corner of the world without exceptions.” The slogan of our party in the parliamentary elections is “Homeland, work, socialism.” If the party wins, the people will win, as we are the closest ally of the Armenians.