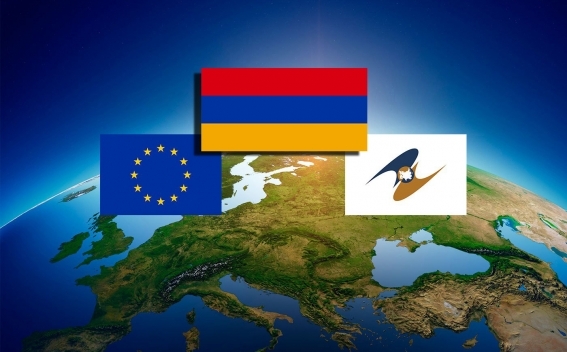 2017 was crucial and even decisive from the point of view of Armenia's integration processes. This year, by signing the Comprehensive and Enhanced Partnership Agreement with the EU, Armenia finally implemented its "both and" policy.

In the context of European direction the year was marked by the end of the negotiations on the Armenia-EU agreement that took place on November 24 within the framework of the Eastern Partnership Summit in Brussels. This event is of great importance in terms of further development of political relations with EU and EU member states. The stereotype that Armenia has "turned away" from the EU and the process of European integration is finally broken.

It is also important that the Agreement has a rather extensive economic component, in which it addresses a wide range of economic issues, including the deepening of trade and further cooperation.

In the political context, it was also important to sign the Armenia-EU Partnership Priorities in 2017, which together with the Agreement, sets priorities for joint policy in the coming years. In this regard, EU Ambassador to Armenia Pyotr Svitalski noted that "Armenia is the only Eastern Partnership country that has signed the Partnership priorities. The latter is a very important document." Based on this document, negotiations on the Common Assistance Framework to be provided to Armenia by the EU and a detailed financial assistance document have been launched at the same period.

During the year, the issue of launching a dialogue on visa liberalization was not solved. The Armenian side has repeatedly stated on the highest level of readiness to start negotiations, but the process has not started yet. At the same time, in the final document of the Brussels summit, the EU hopes to "strengthen the cooperation and further advancement in the field of mobility in a safe and good governance environment and to reach a visa liberalization dialogue with Armenia for which a condition should be well-managed and safe mobility, Visa Facilitation and Readmission Agreements between the Parties ".

Also, the negotiations on the new aviation agreement between Armenia and the European Union have been completed, the agreement was signed on November 24 in Brussels. It is expected that the agreement will bring additional 87,000 passengers and over 16 million euros for the next 5 years.

During the year a number of educational, agricultural, anti-corruption, energy and other programs were implemented with the financial support of the EU. The Bavra border crossing modernization program, the ENPARD agricultural project, supporting the production of agricultural products in line with European standards in the villages, EU4Business and EU4Regions initiatives that promote SMEs in the regions and boost their capacities.

The EU also provided great support in the process of organizing parliamentary elections in Armenia in April.

2017 has been a year of development of the Eurasian Union. During the year, retrospective work was carried out to form common markets, overcome the existing barriers and increase the internal mobility of goods.

Perhaps the most important achievement of the year is the coordination of the Customs Code for the EAEU, which will come into force from January 1 after the end of its ratification.

Another important achievement can be considered the coordination of digital agenda. During the summit in Yerevan on October 11, the leaders of the EAEU member countries approved the main directions of the implementation of the digital agenda. According to preliminary calculations, the implementation of the project by 2025 should ensure an annual GDP growth of about one million and about 8 million new jobs.

During the session of the intergovernmental council in Yerevan a "Roadmap" was also agreed in order to coordinate transport policy.

During the year negotiations continued on the formation of a unified energy market. The electricity market is generally agreed, and the issue of equal access to resources remains unresolved in the reconciliation of oil and gas markets.

2017 was also active in terms of the development of foreign relations of the Eurasian Union. On April 14, Moldova received the status of the EAEU observer country. On October 1, negotiations on trade and economic cooperation agreement between China and the EAEU have been completed. Negotiations with Egypt, Israel, India, Iran, Singapore and Serbia were continued on the establishment of a free trade zone or signing a trade and economic cooperation agreement. Mongolia also expressed intention to start a dialogue with the Union.

In addition, in 2017, the flow of tourists from the EAEU countries, particularly from Russia, has increased. Only in the first six months of the year the number of visitors with Russian passports exceeded the previous year by 33%.