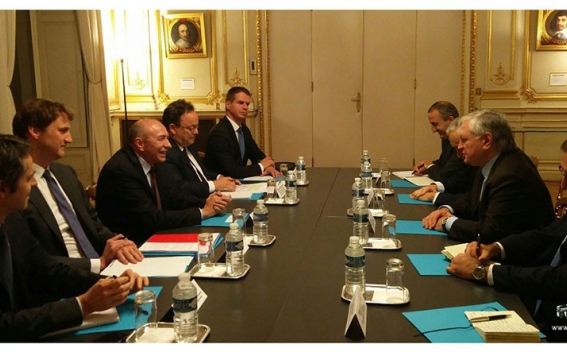 Foreign Minister Edward Nalbandian, who is in Paris on a visit, met with Gérard Collomb, Minister of State, Minister of the Interior of France, MFA press service reports.

Edward Nalbandian noted that he is glad to meet a longtime friend of Armenia who has greatly contributed to the development and expansion of bilateral relations, including in spheres of interparliamentary and decentralized cooperation.

A number of issues of the agenda of the Armenian-French relations were discussed at the meeting.

The interlocutors touched upon the Comprehensive and Enhanced Partnership Agreement signed between Armenia and the European Union. In this context, the possibility of launching a dialogue on visa liberalization between Armenia and the EU was discussed. Minister Nalbandian noted that, with regards this issue, Armenia expects the valuable support of friendly France. Foreign Minister of Armenia added that France has been the first EU country, with which Armenia had started the visa facilitation process in 2008.

At the meeting, the sides commended the successful implementation over the last four years of the existing agreements between Armenia and the EU on visa facilitation and readmission.

The interlocutors exchanged views on the cooperation between the law enforcement agencies of the two countries.