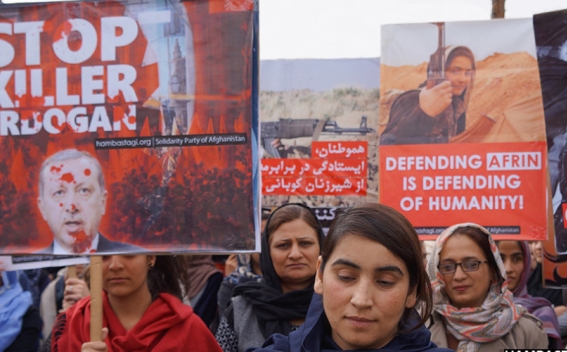 24 March was declared as “World Afrin Day” by an international initiative to show support for people of Afrin and to protest Turkish invasion, ANF News reports.

Thousands of activists took it to the streets on World Afrin Day, to show solidarity with the people of Afrin in several cities throughout the world.

There were protests in several German cities like Düsseldorf, Hamburg, Köln, Berlin, Leipzig and Frankfurt. In Hamburg, eight thousand people demonstrated in Sternschanze.

In Swiss city of Lugano, hundreds of activists marched behind the “Rojava and Afrin is not Alone” banner. More than five thousand also attended protest actions in Zurich and Biel.

In France, protests were organized in Paris, Marseille, Rennes and Strasbourg.

There were also mass demonstrations in Copenhagen, Stockholm, Helsinki, Amsterdam, Brussels  and other cities of the world, where the protestors demand the international community to stand against Turkish attacks.