Third Night of Violence in Barcelona after Jailing of Catalan Separatists 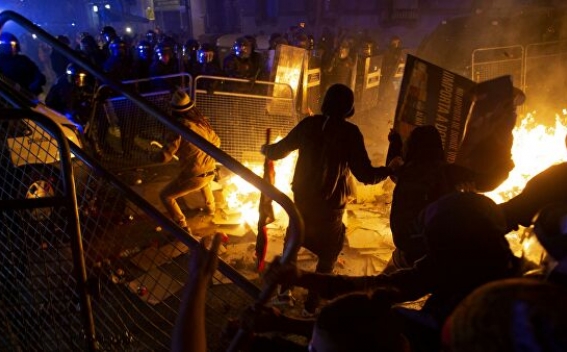 Street violence escalated in Barcelona late on Wednesday, as protesters set cars on fire and threw acid at police officers in a third night of unrest following the imprisonment this week of nine pro-independence leaders for their roles in the failed 2017 push for regional independence, the Guardian reports.

Officers from the Catalan force, the Mossos d’Esquadra, were reported to have fired teargas and run over two protesters during clashes that quickly spread after a earlier demonstration turned into a series of running battles with police.

Police claimed that projectiles had been fired at helicopters.

Roger Torrent, the speaker of the Catalan parliament, condemned the violence, tweeting: “These actions don’t represent us. We must distance ourselves from violent behaviour.”

Sánchez said the government would defend Spain’s constitution and peaceful coexistence but would not be tempted into inflaming tensions.

The prime minister’s address came as tens of thousands of people gathered in central Barcelona to protest against the supreme court’s verdict. Many threw toilet rolls in the air in a nod to the demonstration’s slogan: “There’s a lot of shit to clear up.”