The Foreign Minister of Armenia: Armenia, Unlike Azerbaijan, Has Always Been for the Continuation of Negotiations 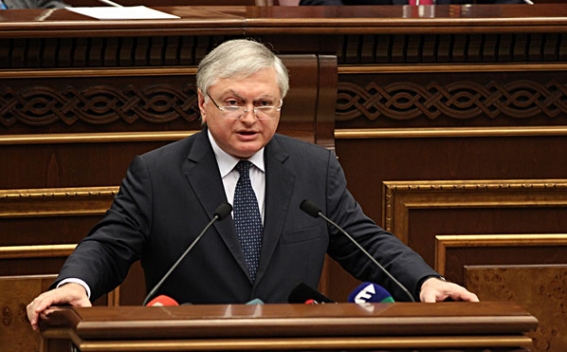 The Euronest Parliamentary Assembly Fourth Session kicked off in Yerevan on March 16. Representatives of Eastern Partnership (EaP) Civil Society National Platforms and NGOs participate in the session. During the session the Foreign Minister of the Republic of Armenia Edward Nalbandian delivered a speech. As the press office of the MFA writes, the speech reads as follows:

I thank you for this opportunity to address the Committee on Political Affairs, Human Rights and Democracy of the Parliamentary Assembly of Euronest.

Armenia highly appreciates comprehensive and multilayer cooperation with the European Union in such areas as democracy, the rule of law, protection of fundamental freedoms, joint programs on sustainable development and good governess, etc. Great importance is attached to the parliamentary dimension of this cooperation.

As outlined in the Joint declaration adopted between Armenia and EU in the framework of the Vilnius Summit, the sides agreed on the need to establish a new legal basis for their relations. Armenia intends to develop the cooperation with European Union aimed at promotion of human rights, consolidation of democracy, improvement of judicial system, fight against corruption, strengthening of civil society, advancement of the environment conducive for trade and investments, enhancement of mobility and development of sectoral cooperation.

At the moment we have approached the final stage of our discussions with our partners on the future legal basis of our cooperation, based on the progress achieved in the previous period. Armenia stands ready to continue comprehensive cooperation with the European Union in all formats, in all possible areas and directions taking into account our obligations in other integration processes.

Promotion of mobility is one of the priorities of our cooperation. Facilitation of people to people contacts with the EU Member States will create better grounds for deepening of the partnership. As you may know the EU-Armenia Agreements on Visa Facilitation and Readmission are in force since January, 2014. EU citizens are exempted from the entry visa requirement to Armenia since January 2013. We anticipate that in the near future new round of negotiations can be launched aimed at liberalization of the visa regime.

We attach importance to further enhancement of our sectoral cooperation with the European Union. For this purpose a protocol on general principals of participation of Armenia in the EU programs was concluded and came into force since March, 2014. It provides an opportunity to participate in the EU programs on education, healthcare, culture and other spheres.

In parallel to the parliamentary and inter-governmental dimensions we greatly value the role of civil society in the implementation of our agenda with the European Union. The large participation of the representatives of civil society at this Session of the Assembly in Yerevan speaks for itself.

Today the attention of the international community is focused on searching the ways of settlement of the Ukrainian crisis. Armenia and Ukraine are tied not only by the centuries-old friendship between our two peoples, but also by the existence of a multi-thousand Armenian community in Ukraine. Armenia has welcomed the results of the Minsk summit, the adoption of the joint resolution by the Presidents of Ukraine, Russia, France and the Chancellor of Germany, as well as the document signed by the Contact group on the implementation of the Minsk agreements. We hope that the implementation of the achieved agreements will pave a way for the comprehensive solution of the crisis.

The peaceful resolution of conflicts has a primary importance for building good-neighborly relations and ensuring sustainable development. At the same time, it must be taken into consideration that every conflict has its own peculiarities and it is not possible to apply one general resolution on their settlement. The efforts to conflict resolution must be carried out within the agreed formats and any actions that may harm the negotiation process shoud be avoided.

The internationally-mandated framework of the Nagorno-Karabakh conflict resolution is the Co-Chairmanship of the Minsk Group and it is important to support its efforts aimed at the peaceful settlement. Statements contradicting the formulations used by the Co-Chairs of Minsk Group can be interpreted as one-sided and can harm the peace process.

With regard to the current stage of Nagorno-Karabakh conflict, it should be noted that Baku continues to oppose the Minsk Group Co-Chairs and does its utmost to undermine the peace talks. It rejects the proposals of the Minsk Group Co-Chairs not only on the basic principles of the conflict resolution, but also on the implementation of confidence-building measures. These proposals are the product of the tireless efforts of the last six years – about twenty summits, several dozen ministerial-level meetings, innumerable visits by the three Co-Chairs to the region.

Baku significantly escalated the situation by drastically increasing the ceasefire violations and targeting civilian objects, including with the use of heavy weaponry. It has claimed unprecedented high number of casualties among all parties to the conflict.

In this situation of ongoing escalation as a result of Azerbaijan’s destructive stance the Co-Chairs expressed serious concerns to Baku on incursions across the Line of Contact and the Armenia-Azerbaijan border. They directly urged "Azerbaijan to observe its commitments to a peaceful resolution of the conflict". The Co-Chairs were obliged to remind about their mandates and express concerns about critical voices coming from Baku on the ongoing negotiation process, the role of the Minsk Group Co-Chairs, and the duties of OSCE monitors. It is important that the Co-Chairs have clearly identified the side responsible for the violence. However, nothing restrains Azerbaijan.

Azerbaijani provocations are also matched with consistent warmongering rhetoric and anti-Armenian hate speech. Azerbaijan has increased its military budget 30 times within the last 10 years and constantly threatens to solve the conflict by military force. Those civil activists, intellectuals and journalists who have been advocating for peace and reconciliation, are prosecuted as „Armenian spies" and end up behind bars.

Armenia, unlike Azerbaijan, has always been for the continuation of negotiations based on the proposals of the Co-Chair countries, aimed at exclusively peaceful resolution of the conflict.

As it is known, this year marks the centennial anniversary of the Armenian Genocide. The recognition and condemnation of the past genocides is one of the main factors of their prevention in the future. That is why states should never compromise this noble cause for any geopolitical calculations.

As early as in 1987 the European Parliament has recognized the Armenian Genocide, and has reaffirmed its position in 2000, 2002 and 2005 rendering a significantly contribution to this end. We also highly appreciate that the European Parliament in its various resolutions has called on Turkey to open the border with neighboring Armenia and establish regular diplomatic relations.

On March 3, the European People's Party has passed a resolution which calls on Turkey to recognize and condemn the Armenian Genocide committed by the Ottoman Empire. It appeals to the international organizations, the European Union and the Council of Europe Member States, to restore the historical justice and pay tribute to the victims.

Four days ago, on March 12, the European Parliament adopted the "Annual Report on Human Rights and Democracy in the world 2013", where it calls on all Member States, ahead of the 100th anniversary of the Armenian Genocide, to acknowledge it, and encourages the EU institutions to contribute further to its recognition.

I would like to take this opportunity to express once again gratitude to all those who contributed to the adoption of this formulations. Only through our joint endeavors it is possible to have a meaningful contribution to the efforts on prevention of genocides and crimes against humanity.

Parliaments have an important mission in establishing connections between societies and promoting inter-state relations. We hope that the Euronest Parliamentary Assembly’s Yerevan Session will make a meaningful contribution to this end.

Let me wish you fruitful discussions in Yerevan.