Dimitry Safonov: It is not Religious Extremism, but Extremism under Religious Cover 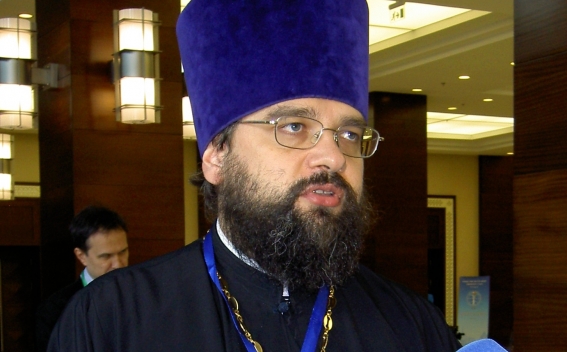 Armedia" IAA presents an exclusive interview with Dimitry Safonov, head of the Sector for Interreligious Contacts of the Moscow Patriarchate’s Department for External Church Relations. The Interview was conducted during the "5th Congress of Leaders of World and Traditional Religions" in Astana in the framework of "Armenia-Kazakhstan: Cooperation Platforms" project, with the support of Embassy of Kazakhstan in Armenia.

- What was the main message of the Fifth Congress of Leaders of World and Traditional Religions?

- I was very pleased with what I heard at the opening of the Congress from the lips of many speakers. In addition to inter-religious dialogue, I am engaged in a very serious problem, the problem of the persecution of Christians, of which Christians are suffering in many countries. A very important issue that was announced here is the problem of religious extremism, or, to be more correct, the extremism under religious cover, because religion itself does not generate extremism. It is important to hear right from religious leaders, especially from Muslim ones, that religion does not call for violence, it calls for peace and good friendly relations, as in the very name of religion, under the guise of Islam's holy places, the extremists of the Islamic State and other terrorist groups are acting today, brutally destroying the Christian population of Syria and Iraq. The Genocide that was carried out 100 years ago towards Armenians, is now being carried out towards all the Christians of the Middle East, both Armenians and Assyrians and Catholics, Orthodox, Chaldean and many more. Thus there is a total destruction of Christianity under the guise of religion which is terrible! Not because they are of different nationality (as the history already knows what the interethnic massacres are), but precisely just because they are Christians.

This hatred for extremists exists not only towards Christians but towards all dissenters. Today it was said that there are certain political forces, even the states, which maybe not openly but anyway do support and finance this kind of extremist movements. But the international community should be united. It is very important that we managed to invite UN Secretary-General Pan Gi Moon to this fifth Congress. I am aware quite well that the UN has always been very careful towards religion. We even once offered to the United Nations to create a permanent body of religious leaders. This suggestion was not accepted as the organization stressed that it is a secular one, not related to religion. But today it became clear that without religion it is impossible to establish peace, and without religious leaders there cannot be a settlement even to political conflicts. But the fact that Kazakhstan managed to invite the Secretary-General of the UN and all these issues will, I hope, be included on the agenda of the United Nations, is really the most important achievement of this Congress.