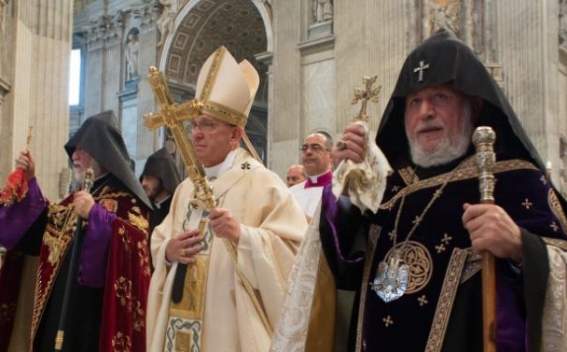 has made a decision to return its ambassador to the , Mehmet Pacaci, nearly 10 months after withdrawing him because of Pope Francis’ statement about the Armenian Genocide.

According the Turkish Foreign Ministry the statement says that ''the Vatican appreciated Turkey’s 2005 proposal to Armenia to establish a joint historical commission to investigate the 1915 killings of Anatolian Armenians during the Ottoman era while also denouncing violence in reference to the 1977 killing of Turkish Ambassador to the Vatican Taha Carim, who was assassinated by members of the Armenian Secret Army for the Liberation of Armenia (ASALA)'', Hurriyet reports.

"Within this framework, a decision has been made to return our ambassador, Mehmet Pacaci, who has been in the headquarters for consultations since a mass held in Saint Peter’s Basilica on April 12, 2015, to his office," said the statement, which came in the form of an answer to a journalist’s question concerning the Vatican Press Office’s statement.

In April, 2015 Pope Francis called the massacre of up to 1.5 million Armenians in 1915 the First Genocide of the 20th century.