The Situation in Kazakhstan: Coup Attempts and Terrorism 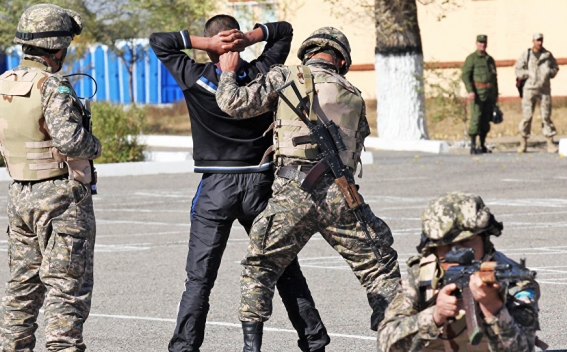 "The Security forces of Kazakhstan killed 13 terrorists in Aktob, and four more were wounded," the press-secretary of the Interior Ministry of Kazakhstan Almas Sadubaev told RIA Novosti. Kazakh police spokesman said seven "bandits" managed to escape, and now they are wanted.

On June 5, 2016 in Aktob (ranked fifth among cities of Kazakhstan in terms of population and is the largest city in Western Kazakhstan with a population of 397,572 people) a few dozen people robbed two gun shops. Then their passenger bus was hijacked, and there was an attempt to attack the military unit, local media reported. The attack was unsuccessful, the part of the attackers fled in an unknown direction. As a result, a special operation was carried out by Kazakh police, the seven participants of the attack were detained. It is reported that as a result of shootings six people were killed: three civilians and three soldiers. Another 38 people were injured. After that Kazakhstan introduced the yellow (moderate) level of terrorist threat for forty days. In Aktob the highest "red" level of terrorist threat has been declared. Authorities are asking the city's population to stay indoors and there are problems with cell phones and the Internet.

The Ministry of Internal Affairs of Kazakhstan claimed that the attacks involved a group of "followers of radical non-traditional religious movements." However, the so-called "Liberation Army of Kazakhstan" has claimed responsibility for the events in western Kazakhstan. "We support the democratic way of development of Kazakhstan, we are the  opponents of Nazarbayev dictatorship, today in Aktob we gave the first fight to the bandits who seized our country. Even if in that particular city the " Nazarbayev" terrorists will take up, and volunteer soldiers of one of our departments will give their lives for freedom of people - we showed our strength, we showed that the struggle for the liberation of the country began, " operline.ru quotes Kazakhstan's liberation Army's statement.

Analysts said the attack was a demonstrative action, directed to the head of Kazakhstan Nursultan Nazarbayev, as the National Guard, which was attacked, reports directly to the President, rather than the Ministry of Defense, gazeta.ru reports.

On this background, the special services of Kazakhstan announced on the prevention of an attempted coup in the country. It was noted that the forcible seizure of power was prepared by the businessman Tokhtar Tuleshov. He, in particular, is accused of financing the massive unrest, which took place in the west of the country.

Generally, in recent years there is a negative dynamics in the economy of Kazakhstan: the national currency ''tenge’' was depreciated, the overall socio-economic parameters decreased. This, naturally, could not but cause discontent among the population.