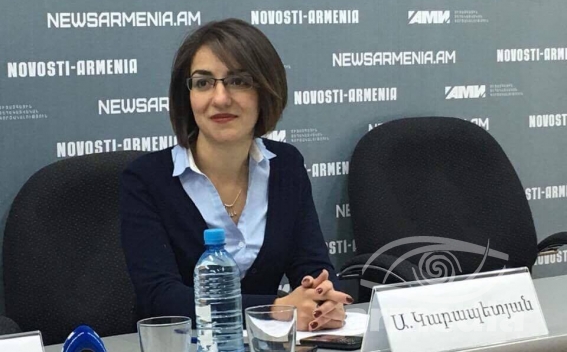 During a press conference in "Novosti-Armenia" media center the expert of "Insight" Analytical Center for Applied Policy and Research Anna Karapetyan noted that in the context of the EU-Armenia relations, 2016 was a year of consistent work and some progress.

"In 2016 political negotiations in six phases were conducted and there is already a consensus reached on the EU-RA framework agreement with its political component. In general this component will duplicate the political component of the Association Agreement. This means that the RA-EU relations will not undergo essential changes and our membership to the EAEU will not have an essential impact on the political side of the RA-EU relations," Anna Karapetyan noted .

As for the economic relations, the expert stated that the negotiations on the economic component of the agreement continue and there are several aspects not agreed yet.

"So far 5 phases of the negotiations have been conducted. They are planned to end in the spring of 2017 and at that time it will be possible to sign the new RA-EU agreement," noted the expert.

"Simultaneously there are consultations ongoing to start the negotiations on visa liberalization. In December the European Commission gave a mandate to start the RA-EU negotiations for Armenia to join European Common Aviation Area. This will become an opportunity for the European companies not only to organize flights from Armenia to their country, but also to third countries," Anna Karapetyan stated.

"Summing up the year we can state that if in spring these negotiations reach an end point, which seems more than possible today, a new agreement is signed and is implemented productively, we can state that the policy of "and-and" always pursued by Armenia gave its results," the expert added.