Will the US Suspend Military Assistance to the Syrian Kurds? 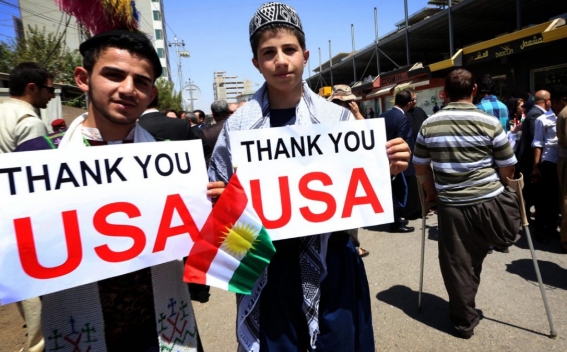 As the fight against Islamic State terrorist organization in Syria and Iraq seems to finally succeed, there are speculations that the US will make some changes in its policy towards the Syrian conflict. The speculations further strengthened, when at the beginning of this week the White House spokeswoman Sarah Sanders made a statement according to which the United States plans to reduce military support for groups fighting against Islamic State in Iraq and Syria. Still she added that it did not mean Washington would stop all aid to those groups, Reuters reports.

In its turn Pentagon declared on Monday that it was reviewing "adjustments" in arms for US-backed Kurdish forces in Syria but stopped short of declaring a halt of weapons transfers, suggesting such decisions would be based on battlefield requirements, Politico informs.

The statement came after the US. President Donald Trump and his Turkish counterpart, Recep Tayyip Erdogan, talked on phone last Friday, based on which Turkey’s Foreign Minister announced the Americans would no longer be providing weapons to the Kurdish People’s Protection Units (YPG).

One should not forget that in May of this year President Trump, following the advice of the American military commanders, made a decision to arm the Syrian Democratic Forces to carry out the final assault on the Islamic State’s de facto capital of Raqqa, despite the opposition from Turkey. And now, when the operation in Raqqa seems to be over, the discussions on making some "adjustments" in the US policy towards Kurdish forces in Syria is more than natural. But does it mean the US will stop arming the Kurds?

The two houses of the US Congress have already adopted the bill, the 2018 National Defense Authorization Act, which will allocate another $500 million to the fight against IS in Syria until next September, equipping additional 5,000 rebel troops with AK-47s, heavy machine guns, sniper rifles and more than $21 million in stipends. So once the President approves the bill it will become obvious that the US is not going to stop supplying weapons to fight IS in Syria.

Second important factor to consider is the fact that so far the US President Donald Trump seemed to follow the advice of his military commanders, despite his statements to reduce the number of foreign fighters abroad. The proof of this is the number of the US troops, that has gradually grown in Syria. Although the official limit on US troops has remained at 503 since shortly before President Barack Obama left office, the actual number is now believed to be more than 1,500, including special forces, a Marine artillery unit, forward air controllers and others. They are spread across more than a dozen bases in northern Syria, AP News reports.

Besides, the US Secretary of Defense James Mattis made a statement in which he the clearly stated:  "We will stand by the SDF through the Geneva process," which means they are not going to abandon their support to the Kurds in Syria very soon as expected by Turkey.

In his turn the US led NATO Coalition against IS spokesperson Colonel Ryan Dillon in his recent statement noted: "The Coalition is committed to the military defeat of ISIS in Syria and to ensure they cannot return to liberated areas. We will continue our partnership with the Syrian Democratic Forces to complete the liberation of the remaining ISIS-held areas, and we will also support security operations that enable stabilization in these areas," The Daily Beast reports.

So, if in reality, the US is not going to suspend the military assistance to the Kurds, what is the disseminated news conditioned by?

First of all, it is not the first time that Turkey tries to interpret the words of their colleagues in the way convenient to them. So this time also, Turkish leadership interpreted Trump’s words the way they wanted, after which the US tried "to correct" them in a diplomatic way via the statements of various officials.

Second, Trump’s administration may attempt in that way to please its NATO ally amid Turkey’s attempt to engage in the trilateral format cooperation with such regional players as Iran and Russia.

Third, the US could wish to warn the Kurds that it may suspend its military aid to them in case they initiate actions, which are not in the US interests. In this context, the information spread that the Syrian Democratic Forces (SDF), Kurdish forces assisted by the US, will not be against joining the Syrian Arab Army (SAA), Assad forces, if a federal state is awarded in northern Syria (Kurdish autonomous territories as part of the federal Syria), is not occasional, Global Research reports.

These are the possible reasons that resulted in the news about likely suspension of the US military aid to the Kurdish forces in Syria. However, in reality, there is no real ground to assume that the US will withdraw its support to the Kurds, at least in the near future. First, the Kurds remain the main allies of the US in Syria and losing them the US will greatly lose its leverage their. Besides, the Trump’s administration seems to realize from the past experience of previous US administrations in the Middle East that early withdrawal will cause power vacuum that will further escalate the chaos in the conflict-driven countries, like Syria.