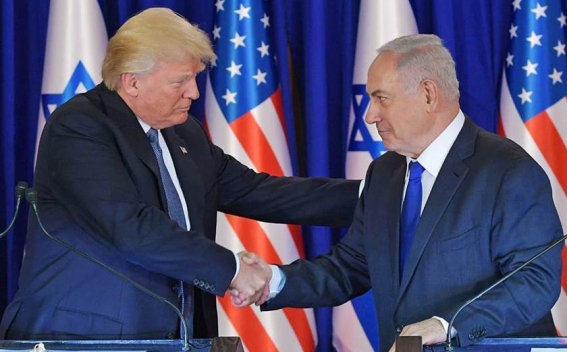 US President Donald Trump and Israel's Prime Minister Benjamin Netanyahu on Monday discussed efforts to counter ''Iran’s malign influence'' in the Middle East, as well as ''optimism in the region'' about Israeli-Palestinian peace, The Times of Israel reports.

The two leaders talked about their ''continuing efforts to achieve an enduring Israeli-Palestinian peace agreement, the optimism in the region about peace, and expanding economic opportunities to improve conditions for peace,'' the White House statement said.

It pledged to safeguard US and Israeli security interests with regard to Iran and Syria. Israel has repeatedly expressed concern that Iran, an ally of Syrian President Bashar Assad, was bolstering its military presence on the Syrian side of the Golan Heights.

''President Trump reiterated the US commitment to Israel’s security, and the two leaders agreed to continue their close coordination on countering Iran’s malign influence and destabilizing actions'', the statement says.

The phone conversation was held on the eve of the UN Security Council’s session which will focus on the topic of situation in the Middle East.