Nazarbayev: 2015 is a Year of Great Risk and Challenge for EEU 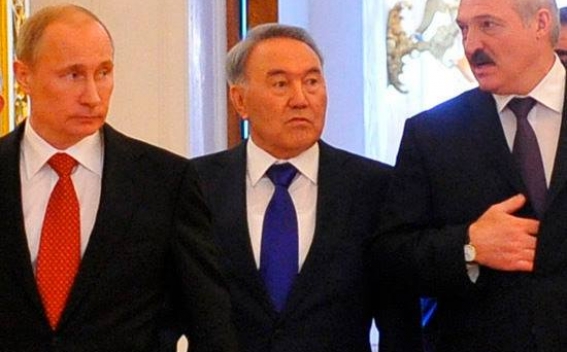 On Friday presidents of Russia, Belarus and Kazakhstan met in Astana to talk around issues on the Eurasian Economic Union (EEU), RIA Novosti reports

Vladimir Putin, Alexander Lukashenko and Nursultan Nazarbayev discussed current international situation, particularly, around Ukraine, the issues of crisis affecting the development of the EEU and sanctions against Russia that also negatively impact on both the Union and its member states, Reuters reports.

"2015 is a year of great risk and challenge for the Eurasian Economic Union. The Ukranian crisis through which the sanctions flow, affects Russia and our states," - Nazarbayev said during the meeting, Izvestia.ru quotes his words.

According to the source, as a result of the meeting the heads of Russia, Belarus and Kazakhstan noted about further steps within the EEU such as the adoption of a new customs code, formation of a common gas, oil and oil-products market as well as the possible perspective of the formation of a currency union. Also, according to Nazarbayev they "agreed to jointly develop trade, economic and investment cooperation, as well as assign the governments to address the raising issues".