Research Director of the German-Russian Forum: We Cannot Build Europe Against or Without Russia (EXCLUSIVE) 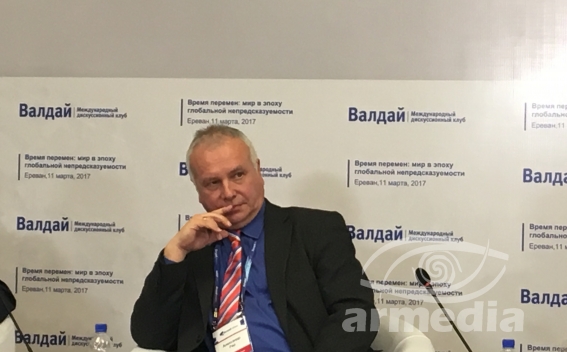 "Armedia" IAA presents an exclusive interview with Research Director of the German-Russian Forum Aleksandr Rahr on the current Russia-West tension and its prospects of development. The interview is done in the framework of the visiting session of Valdai International Discussion Club held in Yerevan on March 11.

- Please comment on the current tension between the West and Russia. What do you think, is it going to further escalate or will the tension decrease?

- In my view the world is moving step-by-step to the new North-South conflict from the old patterns of East-West confrontation.  And all those people, who thought that the East-West conflict had been overcome 25 years ago proved to be wrong. It did not happen, the mentalities, also some of the confrontation lines of the Cold War, unfortunately, are still present in the minds of people. But I repeat again, probably less than in ten years, we will stop fighting the Cold War, because we will have to concentrate on the new conflict line, which divides North and South of our planet. What do I mean - migration challenges, water problems, the developments, which are connected with the radical changes of the climate and of course, the most dangerous fact, the collapse of the Middle East, Syria, Iraq, Libya, maybe Algeria, maybe Egypt in a couple of years. All that will pose Europe in front of a very-very serious challenge.

But you are asking me about the problems that exist now between the West and Russia. They are very serious, but I think they are temporary. They have to do with a very simple fact: the European security architecture does not satisfy all the participants’ security arrangements, primary that of Russia’s, but not only Russia’s, I think also that of Armenia’s and some other countries. Why? 25 years ago the West, which saw itself as an ultimate winner of the Cold War, decided to celebrate even the bigger victory over the next decades - to become the ultimate ruler of Europe. Russian interest of big power in Europe, was not taken into account, NATO and Europe were enlarged in a fast and vivid way, until it became very confrontational for the Russian mentality and own interests. If someone wants to understand the roots of this conflict, he should study all the smaller conflicts that came up in the relation between the West and Russia since the end of the 1990s, I mean the war in Chechnya, where the West had a different view from that of the Russians, the Ukrainian-Russian gas crisis, the Russian-Georgian crisis, Maidan 1 and 2 and many-many other issues. These all conflicts accumulated into huge new conflict over Ukraine.

Those, who really want to understand when all this happened; when the new contradiction happened, I would say that it was the Putin’s speech in the Munich security conference, where he said that they will draw a red line between us and them, which we should not overstep, otherwise we will have huge problems, serious conflicts. Putin meant the NATO and enlargement in Ukraine, George, missile system installation in Europe. What was the answer of the West? We don’t care, because Russia does not matter.  This was a stupid answer at that time given by the West and it followed the present crisis, which I repeat is, in my view temporary, but still very serious.

- You have authored the book "The Cold Friend – Why We Need Russia". For those who have not yet read the book, what is your answer to that question?

- That book came up in 2011 before the Ukrainian crisis. Today I have a new book on Russia "Russia- West: Who Beats Who?" It is much more serious today than it was 5 years ago, when I wrote the book. At that time, when I wrote the book on the cold friend the relations were worsening, but not to the extant, that we could speak about a new Cold War. Now unfortunately, we could easily use this terminology.

- If you were to answer that question today, what would be you response in two sentences?

Unfortunately, this conflict between Russia and West is built on many-many historical mistakes, misunderstandings, geopolitical confrontation and wrongdoings, which occurred 500 years ago. Neither of the sides or both of the sides are to be blamed for this. Nevertheless, we cannot build Europe against or without Russia. This is absolutely clear, especially for the Germans.  If we want to build Europe without Russia or Europe, which confronts Russia, we will have worse than a new Cold War – unstable Europe for the next decade. Unfortunately not every European state, especially the Central Eastern European states understands this.