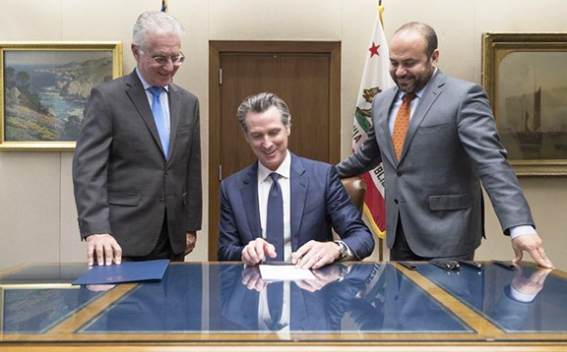 “California stands on the side of justice and remembers the 1.5 million souls lost during the Armenian Genocide,” stated Governor Gavin Newsom. “Today and every day, let us recommit ourselves to making certain that we never forget and that we always speak out against hatred and atrocities anywhere they occur. I am proud to stand with friends and sign AB 1320 into law.”

“California, the 5th largest economy in the world, just told Turkey to end its deceitful campaign of genocide denial,” stated Assemblymember Adrin Nazarian. “I want to thank my colleagues, Governor Newsom, and all those who have fought with me on this long path to recognizing the 1.5 million Armenian souls lost to genocide.”

“This is a significant victory for the Armenian Cause after a long and hard-fought battle, but the war is not over by any means. We are exceedingly grateful to Governor Gavin Newsom for remaining steadfast in his commitment for justice for the Armenian Cause by keeping his promise to sign the Divest Turkey bill into law once he assumed office after publicly voicing his support during his term as Lt. Governor and after our meeting with him in August,” said Armenian National Committee of America-Western Region chairperson Nora Hovsepian, Esq.

“The persistence and perseverance of Assemblymember Adrin Nazarian and the unflinching support of his colleagues in the State Assembly and State Senate in working with us to advance this agenda have been immeasurable, and we greatly appreciate the hard work it took to achieve this result,” added Hovspeian.

“After this movement was initiated by the Armenian Youth Federation and the All-Armenian Students’ Association on college campuses throughout California, the ANCA-WR worked hard to bring it to the legislative floor. This was truly a team effort, and the result speaks for itself. We will continue to spread the message of Divest Turkey to other entities, now being able to use this newly-enacted law as an example of how the State can align its human rights policies with its fiscal policies.” explained Hovsepian.

California has a long history of divesting from countries that violate human rights. Threatening to divest from Turkish bonds over its denial of the Armenian Genocide would end the continued funding of a campaign of genocide denial. This bill sends a strong message internationally that California demands justice for the murder of 1.5 million Armenians.

The boards shall liquidate investments only upon action taken by the federal government. More specifically, CalPERS and CalSTRS must liquidate any of the investments described above within eighteen months of the passage of federal sanctions on Turkey.

This bill also requires the boards of CalPERS and CalSTRS to submit reports to the Legislature and the Governor, within a year of when the federal government issues sanctions against Turkey. The report will detail a list of investments that they have already liquidated and a list of investments that potentially can be liquidated. CalPERS, estimated that the exposure to the fund from Turkish investment vehicles ranges between $77 million up to $350 million as of December 31, 2018.

From its July analysis, CalSTRS estimates the holdings of debt securities issued by the government of Turkey is approximately $3.2 million. Global equities and currency investments subject to possible divestment have a potential combined market value of up to $8.3 million.

“I want to thank the Armenian Assembly, the Armenian National Committee of America – Western Region, Armenian Youth Federation and Armenian Student Associations throughout the UC and Cal State system and all the other college campuses for helping advocate for AB 1320,” stated Assemblymember Nazarian.

California is home to the largest Armenian-American population in the United States and one of the largest Armenian Diaspora communities in the world. Annually, the Los Angeles Armenian Diaspora organizes a march and protest on April 24th, to the Turkish Consulate to condemn Turkey’s denial of their history of human rights violations and targeted murder of the Armenian people in 1915. AB 1320 sets precedent that we will not support Turkey, as it continues to savagely violate human rights today as it did over a century ago.

Assemblymember Nazarian added: “I am not finished fighting for justice and reparations. My next fight is federal recognition of the Armenian Genocide.”