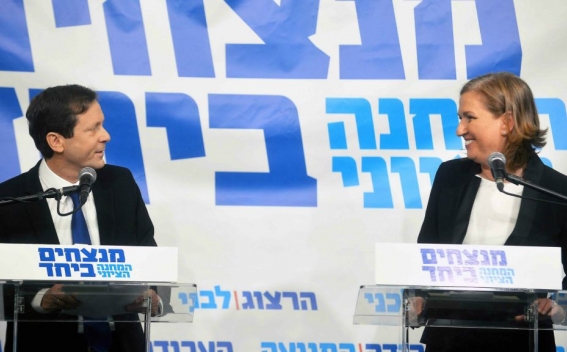 The Zionist Union, which according to the latest poll is ahead of all the parties running for the parliamentary elections, is a center-left political alliance in Israel, established in December 2014 by Labor Party and Hatnuah Party to run with joint electoral list in the 20th Knesset elections to be held on March 17, 2015. The leader of the Labor Party is Isaac Herzog and the leader of the Hatnuah party is Tzipi Livni. In case they form a government they will rotate in the post of the Prime Minister: first half – Herzog, and the second half – Livni.

As it is said in the election platform of the Zionist Union, the Union is fighting to replace the current Israeli leadership and build a better Israel.  As Kololeh.com reports "Zionist Union is committed to reducing the cost of living, narrowing gaps in society, eliminating corruption, restoring strong relations with the rest of the world, and fulfilling the promise of a democratic Jewish state as envisioned in the Declaration of Independence."

As for the security of the country,  on which the political parties mainly build their arguments, the Zionist Union considers that reaching a diplomatic accord with Palestinians is very important. In case of being elected it claims to reach to good relations with neighbors "alongside the unequivocal definition of the State of Israel as the nation state of the Jewish people," – ynetnews.com quotes the Zionist Union Platform. With diplomatic and security initiative stated in the platform, the Zionist Union will renew bilateral negotiations with the Palestinians to come to final settlement based on preserving the security needs of the State of Israel. As the platform states the final settlement of the conflict, as Jerusalem Post reports, "will be based on the following principles: demilitarization of the Palestinian state; keeping the West Bank settlement blocs under Israeli sovereignty; strengthening Jerusalem and its status as the eternal capital of Israel; and guaranteeing religious freedom and access to the holy places of all religions while maintaining Israeli sovereignty." It also insists on controlling the Jordan Valley.

The settlement construction outside the settlement blocs, as the Zionist movement claims, should be ceased, as it is bad for Israel’s international reputation and brings the country to isolation.

The platform of the Zionist Union also refers to the Iranian nuclear threat declaring that it will stop Iran to develop its nuclear capabilities "through a final-status agreement between Tehran and the international community, which includes dismantling the existing nuclear infrastructure, and a strict and effective regime of supervision and inspection," – ynetnews.com quotes the platform.

Special attention in the platform is paid on strengthening relations with the US considering it an important component of Israel’s national strength. "Hurting this allegiance, much like the deterioration in Israel's international status, leads to unimaginable damage to Israel's diplomatic and security strength," – the platform states, ynetnews.com reports.