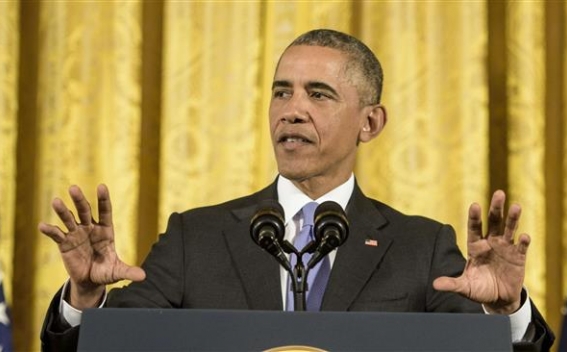 The nuclear agreement between Iran and the major world powers started to have its impact on the Middle East geopolitical situation as it was expected. The US president Barack Obama said the Syrian crisis cannot be solved without the support of Iran, Russia, Turkey and other regional states, Press TV reports.

"In order for us to resolve the Syrian crisis, there is going to have to be agreement among the major powers that are interested in Syria that this is not going to be won on the battlefield," Obama said. "Iran is one of those players, and I think it’s important for them to be a part of that conversation," added Obama during a press conference in the White House.

He also noted that "the resolving of all problems in the Middle East is not the job of the US president". "It’s too chaotic, there are too many factions, there’s too much money and too many arms flooding into the zone," he said.

Earlier in his interview to New York Times Obama expressed hope that "Iran would turn up as a peaceful leader in the Middle East". "The truth of the matter is that Iran will be and should be a regional power," Obama noted in his speech.

All these statements are to prove the analysts’ words that the West aims to use Iran in fight against the Islamic State that got unprecedented power in the region. The western powers have realized that comprehensive approaches are needed to fight against the Islamic State and it is not possible to defeat it through air strikes or by training the "good" fighters like they used to say.

It is no secret that Iran has been supporting the Syria’s president Bashar Assad’s regime both by diplomatic and military means. Analysts say after the nuclear agreement Iran will be able to supply more arms to his allies in the region. This means that Iran’s involvement in the Syrian crisis can significantly increase and this can lead to breakthrough changes in the conflict.