Albert Poghosyan: May the Friendship Between Kazakhstan and Armenia Live Long 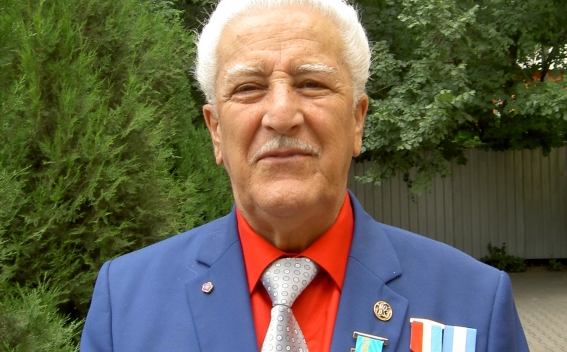 "Armedia" IAA presents an exclusive interview with Albert Poghosyan, member of the Armenian community of Almaty city. The Interview was conducted during the "5th Congress of Leaders of World and Traditional Religions" in Astana in the framework of "Armenia-Kazakhstan: Cooperation Platforms" project, with the support of Embassy of Kazakhstan in Armenia.

- You are the first Armenian who was born in Almaty. Will, you, please, share the story of your family, how did you get here?

- In 1937, the Council of Ministers of the USSR exiled us, Armenians, from our homeland. In the decision it was stated that it is for the sake of borders' security. 32 families were sent away from their villages, among them was our 5-member-family, the youngest one being only 3 years old. We were deported from Armenia in boxcars. We were allowed to take only the most necessary things and be ready within 24 hours. We were on the way to Kazakhstan for 3 months. When we at last came there, we started living in barracks in the city of Alma-Ata. According to the stories of old men, it was autumn then, and I was born on the 2nd of February. At that time the head of the Republic was Levon Mirzoyan, and our elderly people appealed to him for a help. We chose Molotov farm, which is between two rivers, a beautiful valley near Alma-Ata.

How did the Kazakhs welcome us? I will keep repeating that every now and then - perfectly! While the Kazakhs themselves lived in mudbrick houses in poverty, each of them helped as much as could: someone brought a chicken, someone a lamb, and someone shared meal. Thanks to the Kazakh nation, we were not lost here. We slowly began to settle down, planting tomatoes, cucumbers, building a mill. Until now, we remember the kindness of these people, many of whom are still alive. Sometimes we visit this village, take gifts with us and lay a long table near the river together - about 300 people. That’s how we express our gratitude to the land that nourished us, though we are still in in an eternal debt. We pass these traditions to our children. I am very fluent in Kazakh and it is also very important. If you live in a one place, you should learn the local language.

- What is the life like for an Armenian in the independent Kazakhstan?

- Of course, being born and raised in the Soviet era, I am proud of the time during which my ancestors and we used to live. Following the acquisition of Kazakhstan's independence, a dilemma arose: how to live? There are many ethnic Koreans, Uighurs, Armenians, Tatars, Tajiks, etc. The greatest merit of our President Nazarbayev is that he combined all into one fist, turning into reality the idea of ​​tolerance so that each national could preserve his identity and culture. Thanks to our activists, we founded our cultural center in Alma-Ata. I know Armenians who run theaters which is a very big business in Kazakhstan. I, as an Armenian by nationality, am very proud of our traditions, and I support them, learn, share my experience with children and grandchildren. It's probably the only country where everyone is equal before the law.

In our cultural center the Armenian culture is developing. But the culture is a general thing which knows no nationality or borders. First, we have opened a Sunday school in Armenian language, where Kazakh language is also taught. We created our own ensemble "Nairi". In carrying out the activities of the state, city, regional scale (New Year, 1st of May, Victory Day and so on) our Armenian cultural center has always been actively involved. We show our cuisine, culture, put on our costumes, and it has always been very nice and very cool. In our Armenian center we hold a lot of meetings, invite members of other national-cultural centers regardless of nationality or religion. Even people like Charles Aznavour has visited us here. That meeting gave us the opportunity to talk to him, and in general, any face to face meeting inspires us greatly. I, as an aged man, believe that as soon as there is a superiority of one religion over another, a tragedy begins. We live here as one big family, I have many Kazakh friends. May the friendship between Kazakhstan and Armenia live long!