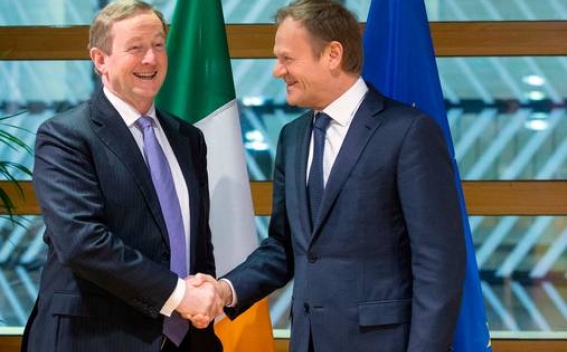 In the negotiations between EU-United Kingdom, Northern Ireland is trying to get the most favorable conditions for itself, which can create new problems for London. On April 29, the EU summit adopted a guideline for negotiations on Brexit between the EU and the UK. In the guideline, among other issues were those that concerned the border between Northern Ireland and the Republic of Ireland. The document underlined the importance of preserving the Belfast Agreement, saying that the issue of Ireland needed "solutions that required flexibility and imagination, including solutions that would exclude hard borders, but also respect the unity of the legal framework of the Union." In addition, the chairman of the European Council, Donald Tusk, noted in his speech that, before talking about the future relations of the EU with the UK, it is necessary to fix a significant result in matters relating to the rights of citizens, finances and borders of Ireland.

On the eve of the summit, the Prime Minister of Ireland, Enda Keny, also asked for the inclusion of a paragraph in the document that would stipulate that Ireland could unite, in which case Northern Ireland would become part of the European Union. Based on the document, this formulation was not adopted by the EU. The Belfast agreement assumes that at any time, when the majority of the population of Northern Ireland expresses their will to unite with the Republic of Ireland by will, the responsibility of all parties will be to make a decision and give the corresponding status to the unit. However, it is necessary to hold a referendum for this, and, based on the words of the Prime Minister of Northern Ireland, now it is not appropriate time for holding such a referendum.

In fact, today Northern Ireland does not have a clear desire to leave the United Kingdom and unite with the Republic of Ireland, but rather wants to get guarantees that in case of such a desire it can immediately be included in the European Union, bypassing the long pre-membership process. The Northern Ireland government understands very well that Irish voting against Brexit does not mean the desire to leave the United Kingdom, and starting such a process, given the correlation of forces within the country, can renew Northern Irish conflict. In turn, as reported by the BBC, the Secretary of State for Brexit, David Davison, wrote in an official letter that should the people of Northern Ireland vote to leave the UK, they would "be in a position of becoming part of an existing EU member state, rather than seeking to join the EU as a new independent state."

The issue of Northern Ireland is obviously an important part of the EU's agenda for the UK, as all parties are aware of the need to implement Belfast agreements, namely, to ensure the deep and uninterrupted conditions of cooperation between the Republic of Ireland and Northern Ireland, which are important factors of regional stability and prevention of the conflict resumption. This may be due to the statement of Tusk on the prevention of "hard borders", as well as the statement of the representative of Britain on the inclusion in the EU, if  Northern Ireland wants so. In such a situation, Northern Ireland is trying to obtain written guarantees, even if not pursuing the goal of withdrawing from the UK right now.

Another question is that depending on the negotiation process around Brexit and on the degree of justification of the expectations of the parties, the issue of Northern Ireland can get a new urgency, and even be used against the United Kingdom.