Molenbeek: Islamic Ghetto in the Heart of Belgium 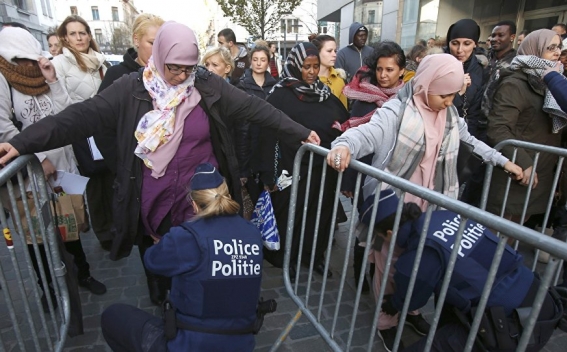 Molenbeek is one of the nineteen municipalities of the Brussels metropolitan area and a hotbed of jihadist activity in Europe.

During the Industrial Revolution it was known as 'Little Manchester', by dint of the many thriving factories and warehouses that sprang up beside the newly-built waterway.

Today, ''Little Morocco'' would be a more appropriate soubriquet. For crossing the bridge into Molenbeek — as it is called — you feel as though you abruptly came out of Europe and entered some seething Middle Eastern or North African ghetto.

Many shop signs are in Arabic; the butchers are almost exclusively halal; there is a bustling, souk-style open market; full-face veils are worn as routinely as in Tangier and Istanbul, The Daily Mail writes.

The area, which is one of the most densely populated in the country, had an unemployment rate of 29 percent for men in 2013, compared to 22 percent in the rest of the area. Over 25 percent of the population is  Muslim, many of whom are immigrants from North Africa and Turkey. There are 22 mosques in the area—more than four times the number of churches—and several have been suspected to be extremist recruiting grounds.

After several convicted and suspected terrorists were found to have lived in the suburb, Molenbeek received criticism in regards to combating Islamic terrorism and the radicalization of young Sunni Muslims. It has been taking place in private homes rather than in more open places, such as mosques.

According to Islam in Europe, Islamic extremism has become a subject of much consternation in Belgium, a country that is now a top exporter of jihadists to Syria. Over 440 Belgian citizens have traveled to fight in that nation’s civil war.

The mayor of Molenbeek, Françoise Schepmans, told that she believes certain residents of the area left to fight with ISIS in Syria and then returned to train others which is very dangerous. "The situation was left to rot too long, and we let radical Islamists take control," she added.

It should be reminded that Molenbeek became even more famous at the end of the last year, after November events. The recent Paris attacks have thrust Molenbeek into the international spotlight. Belgian authorities carried out a series of raids searching for key suspects believed to have lived in the area. Two people arrested have been charged with terrorism offences.