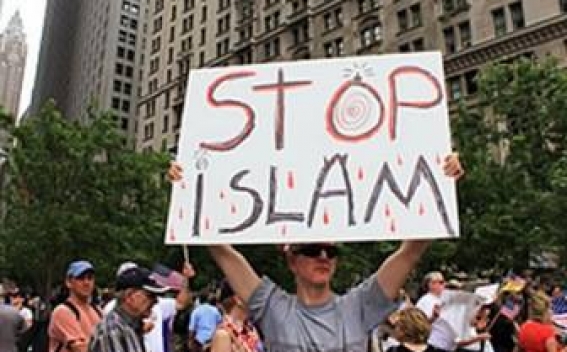 In some places in France and abroad began to appear rude Islamophobic graffities on walls. There are fears that recent attacks may lead to an increase in the persecution of Muslims around the world.

According to the Independent, UK Muslim community complained of the increasing number of attacks on Muslim women after the attacks in Paris, and in Germany there have even been cases of bombing the refugee camps.

According to the testimonies collected by the working group of the French government on issues of Islamophobia, a week after the terrorist attacks in Paris, there were 115 attacks motivated by religious or racial hatred.

Most often girls and women aged 14 to 45 who wear hijabs are subjected to these attacks. The attackers are mostly local men aged 15 to 35 and a large number of such incidents occur in public places.

There is also a great verbal abuse, as Euronews reports, when it comes to expressions such as ''terrorists'', ''bombers'', ''bastards'' directed to the ordinary Muslims in the streets.

However, politicians are constantly trying to explain to people that the refugees have nothing to do with the terrorists of ''Islamic State '', and that the extremism and terrorism are not related to refugee flows into Europe.

''Some were just waiting for such a moment to show their racist attitudes '' - told one Muslim to France24, - ''Islamophobia did not appear by itself - it was created. Media and politicians should choose their words more carefully''.

''There is no ''Islamic State''. It is a Barbaric state'' – told another Muslim.

Muslims around the world are also storming social networks reporting that they are not terrorists and quoting verses from the Koran, which condemns the killing of the innocent. "ISIL (Islamic State) does not represent Islam and Muslims. We must unite to stop this group from the destruction of Islam, because our religion does not support terrorism" – they say.

In Paris, which still has not recovered from the shock, the Muslims have even organized a flash mob - embrace offered to passers-by saying: ''Islam is a religion of peace.''