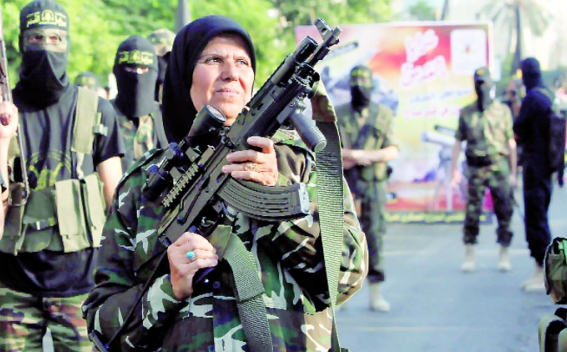 "Islamic State" leader Abu Bakr al-Baghdadi recently announced about the formation of a women's battalion, the commander of which is also a woman, the terrorist Nada al Katani. Her group is based in the Syrian city of El-Hasaka in the north-east.

Al-Baghdadi has met Al Katanitwice and described her as a woman of a "strong character’’. Nada al Katani joined and has sworn loyalty to the organization in 2013. She has urged women to join the ranks of IS, as well as declared her intention to become a suicide bomber.

Among the Islamic State militants, the total number of which is about 60 thousand, there are at least 550 women who came here from Western Europe. Fighting in Syria and Iraq, these women arrived from France, Germany, Belgium and other European countries as well as countries of the former USSR.

The main reasons that women leave their houses and their secure lives and join the terrorists are their personal tragedies, or their desire to marry a jihadist.

In many cases women do not know exactly where they are going. And only after reaching the IS occupied territories, they understand all the seriousness of the situation, but they no longer have a way back.

It is noteworthy that in addition to the armed batallion of women, also the "Al-Hansi’' women group was created in IS. This special brigade's duties include patroling the streets of cities, tracking how other women maintain Sharia norms. "Al-Hansi" members are also recruiting Muslim girls for marriage with militants.