Turkey-Russia: What Does Their Recent Rapprochement Mean? 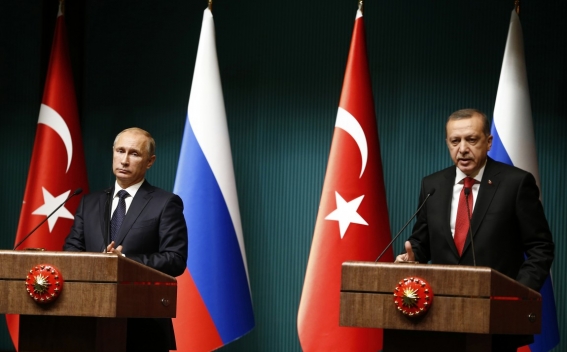 After being re-elected, Russian President Vladimir Putin made his first foreign visit to Turkey. The aim was the negotiations between the regional trio, Turkey-Iran-Russia, during which it was planned to hold discussions on regional developments, in particular on the Syrian crisis.

Let's remind that the basis of this format was laid in Astana and the last summit was held in Sochi in November, 2017. Certainly, the developments following that period will be on the negotiation table, including Turkey-initiated "Olive Branch" in January, the latest developments in Idlib, the political transitional period in Syria and the Eastern Ghuta issue.

On April 3, Iranian President Hassan Rohani arrived in Ankara, and before that, Putin and Erdogan touched upon issues considered as priority in bilateral relations at the Russia-Turkey High-Level Cooperation Council meeting.

Thematic coverage of Russia-Turkey bilateral negotiations can be divided into two broader groups: military-political and economic one.

Military-technical cooperation is particularly important in the military-political sphere, in particular, the acceleration of the supply of Russian anti-missile systems C-400, which will start in 2019-2020, at the "request" of the Turkish side. The US Congress stated that in response to purchase of C-400 systems, it may ban the supply of F-35 fighters to Turkey.

Ankara has paid great attention to economic cooperation, which is evidenced by the construction of the Turkish Stream project and the construction of the Akkuyu Nuclear Power Plant, which was launched during the negotiation process in a videoconferencing regime. This program is estimated at about $ 20 billion. This is the first nuclear power plant to be built in Turkey. The importance of the power plant is first of all conditioned by the lack of oil and gas resources in Turkey and the need for other energy sources. In addition, this will give rise to the development of nuclear industry in Turkey, which will have a positive impact on the country's production capabilities.

The other important issue is the ''Turkish Stream'' Russian-Turkish large-scale project, by which Russia will supply gas to Eastern Europe through Turkey, which is of great importance for Russia.

As a result of bilateral negotiations, a number of documents were also signed and it was instructed to prepare other documents as well.

All this, of course, testifies the warming and deepening of bilateral relations between Russia and Turkey. The leaders of the countries have noted that there is no obstacle for their relations to warm up and they have expressed readiness to continue the deepening of relations. Putin called Ankara "a very reliable partner", while the Turkish president said "Some forces have tried to poison the relations between the two countries. But after that, our relations have become even stronger."

Exceptional warming of political relations seems to be an unprecedented phenomenon, although in the recent decade Russian-Turkish relations have been aggravated, by the murder of Russian Ambassador Andrey Karlov in Ankara or the collapse of the Russian "SU 24" plane.

These new realities appear in the background of a number of events. A few days ago, US President Donald Trump, who initially spoke of the need to weaken US role in world politics, announced that the US would soon withdraw its troops from Syria. And now it is a good opportunity for regional powers to strengthen their positions there.

This rapprochement occurs in the backdrop of tensions between Russia and the West, deportation of diplomats and mutual accusations against the Russian former agent in Great Britain, Sergey Scripal and his daughter's poisoning, in which the West blames Russia and the latter categorically denies any connection with the incident.

The Russian-Turkish rapprochement is also taking place in the context of a new tension between the US ally Israel and Turkey, as well as the mutual allegations between the two sides, as well as the deterioration of US-Turkey relations: Turkey's military coup attempt in July and Fethullah Gulen's resettlement in the United States, and now Turkey’s blaming the US for showing open support to the Kurds.

These are some of the many realities that could have been the cause of the rapprochement between Russia and Turkey. Nevertheless, there is a new correlation of forces in the Middle East, and it is not excluded that in the near future we can see changes both in military and political processes.